Since it's the last day of January I figured it would be appropriate to show my progress so far with this month's journal quilt. I have a headache, as if I've been exposed to something again (but I have no idea what that might have been), so please forgive any lack of enthusiasm that might seep through.

I came up with the idea for this quilt at the end of December, after I got stuck on the Solstice quilt. The duality I experience in my world had come up again so I thought I would explore that from the aspect of my sign of the Zodiac, Gemini. I was a teenager the last time I gave any thought to how accurate or inaccurate the Zodiac descriptions might be. I did some online research, my primary source being gotohorscope.com. As it turns out, I found it to be pretty darn accurate! It took a week or two of mulling that information over and looking at various depictions of the sign before I decided how I would approach this quilt.

Above all I wanted to keep it simple. That meant no renderings of twin cherubs or anything like that. Instead, it occurred to me that I might be able to create the sort of roman numeral 2 symbol by free piecing or stacking and slicing fabrics. I wanted to avoid any obvious light vs dark interpretations so instead of making one leg of the symbol white, for example, and the other black, I chose to use colors and to cut the symbol in half horizontally rather than vertically. By using the stack and slice method I could cut both halves of the quilt top at once. My first fabric choice was the green I'm trying to include in each journal quilt. Because the green I chose had pink in it I went with a pink print for the other fabric. 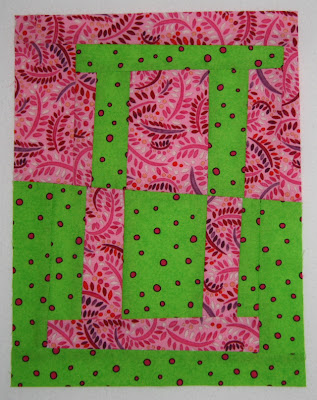 It took three tries to get the version you see above. I mis-cut the first time and got a rectangle instead of the symbol I was shooting for. On the second try I learned that I had to keep the legs of the symbol basically the same size or the symbol wouldn't show well. I was happy with this version until I realized that any beading I might do to outline the symbol would virtually disappear against the pink print or compete with it visually. Back to the stash... 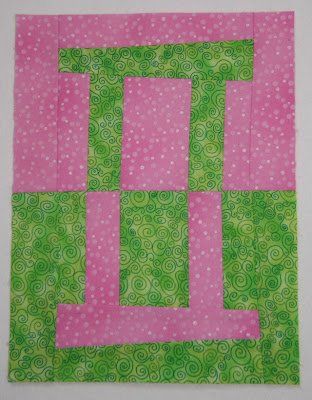 This is my fourth try and I'm pleased with it. I have mixed a bead soup of shimmery white and silver beads with which I will outline the symbol. I chose the white per the information on the horoscope web page. I added silver to represent Mercury, Gemini's ruling planet. I don't anticipate doing much more than simply outlining the symbol with beads this time. There isn't really room for much more than that in my opinion. But who knows? Things change as we work, don't they?

And now it's time to think about what to do for February's journal page. I have a giant heart milagro I'd love to use as a focal point on a small quilt sometime, and February seems like the perfect time to use it, but I'm having second thoughts now. I'm leaning toward thinking of my quilts numerically instead of by month. Like, instead of December and January journal quilts they would be journal quilts 7 and 8. To sort of break free from the associations that might come with the calendar year. I guess my primary goal as I approach challenge projects is to do something unexpected, take it in a surprising direction. Watch; having said that I will probably turn out something completely trite for February!