While I was out of commission last week not only did I not post to my blog but I didn't even feel up to reading the long list of blogs I've made a habit of visiting. I think I've been cruising around Blogland for almost 3 hours now, catching up! I know there's a way to subscribe to a lot of the blogs, I just haven't taken the time to learn the details or figure out how to do it yet. I'm not a techno-geek, just a fiber geek!

I have finally put in some time on the tote bag challenge that's due later this week. I'm not showing pictures of what I've done so far because I know at least one member of the group reads this blog and I want it to be a surprise. This is what the tote bag originally looked like: 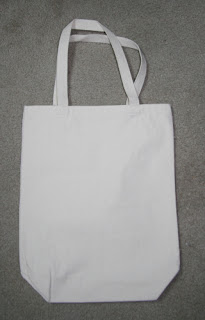 And this is the fabric that we're supposed to use on the tote bag somehow: 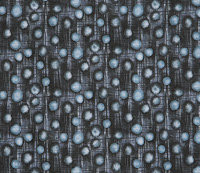 One of the group members suggested pre-washing the bags because she was leery of shrinkage. Good thinking! Once washed and dryed the bag was significantly smaller. Shorter and skinnier. What I will tell you is that I removed the handles from the tote bag, intending to replace them with custom-made handles. Well, that little experiment didn't work. It's been a long time since I've had such a complete failure. I finally gave up and went out to buy more webbing ~ because the handles will have to be longer than the ones I took off the bag. And that's all I'm going to say about that!

The bright spot of the last week was when my friend C~ stopped by to drop off a piece of fabric she'd found that had my name on it! 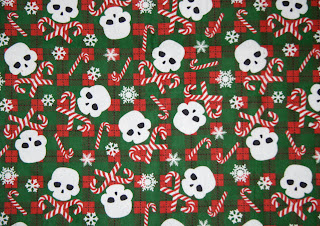 This is a flannel print she found on clearance at JoAnn Fabrics. My first thought was gift bags a la Tonya at Lazy Gal Quilting. You can see her bags here and here. (She also has a tutorial for making them; check the sidebar on her blog.) C~ also brought me a couple of ties she'd picked up at a new thrift store in the area. I didn't photograph them as they were rather fragrant. They went straight into the laundry and have now been washed, ironed dry, and assimilated into the stash.

I want to thank everyone who has been leaving comments for me. I may or may not get back to you (it often depends on whether you are a no-reply commenter) but know that I appreciate your input and your good wishes.