Some Good, Some Not So Good...

I'm happy to report that I've been doing some sewing. Just not on either of my journal quilts! In this case I've used a charity as an avoidance technique. (Can a person be both bad and good at the same time?!) These red and white blocks are for Quilts 4 Leukaemia. I'd been wanting to make some blocks for that worthwhile cause ever since I first read about it on Clare's blog. 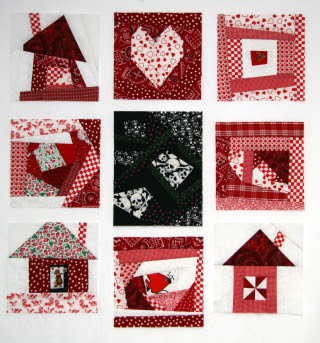 My son kindly pointed out that one block on my design wall was not like the others. How perceptive of him (heavy sarcasm). As you can see, I worked my way all around the skull journal quilt. What remains to be seen is whether I'll make one more block for a nicely balanced 9-patch set (not that the blocks will end up in the same quilt anyway) or whether this lot of 8 will go as is. They were just easier to make in sets of two. What surprised me was how little I had in the way of red scraps! And how hard I found it to work in only two colors: red and white. Especially for the free-pieced blocks. Traditional blocks often were made in only two colors. I just haven't had the desire to make any traditional blocks lately.

Yesterday morning while I was journaling I had an idea for using the recycled silk ties I collect. Since I had the opportunity to act on that inspiration I pulled out the boxes in which I keep the colors separated and had at it. 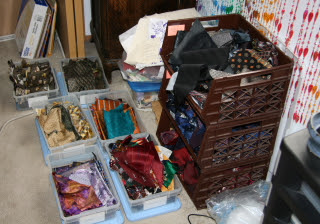 My original idea did not pan out. This is what I ended up with. 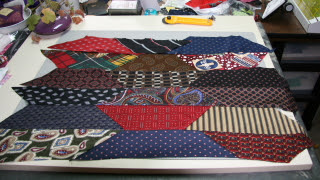 I can't say that I'm thrilled with it either. (The top row in the picture is not actually sewn in place at this point.) I have an idea for a variation on what I was trying to do but I'm not sure I'll be following up on it today. The pain of failure is a little too fresh. Not that I see this as a complete failure; it just didn't work out the way I had envisioned. And every "failure" serves to help me see more clearly what works for me. So it's not a failure, merely a method that didn't work. Who knows, maybe this will send me to my beads and threads and get me started embellishing that journal quilt!

And now, a little bit of Halloween: 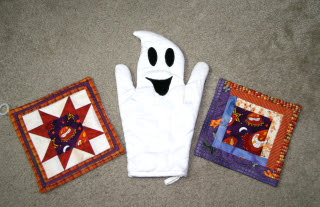 The potholders on either side of the ghost oven mitt were made by a friend of mine, not me (although I have almost every fabric in them in my stash!). My DD has a couple of Halloween potholders that I made last year and saw again for the first time last week. They were cute! Who knew?! I have a couple more Halloween decorations I want to show you so I guess I'll have to get busy and get them photographed in the next couple of days :- )