I want to thank everyone for the kind comments on my Orphan Train quilt. It's so nice to get positive feedback! The top is still pinned to our living room wall. Yesterday I cut and sewed and pressed the backing. Now it can go to Heather whenever she's ready for it or when I'm ready to give up the warmth and color in the living room, whichever comes first!

I have a feeling that the fog I've been in has been partly due to the concentration I put into creating the Orphan Train quilt. As Finn put it, I "hit the pavement running" with that project and didn't stop until it was done. While I do generally focus on one project at a time it is unusual for me to stay with one of that size with that intensity. I surprised myself with that one. So I am probably justified in needing some down time to recover. And I should know by now that it takes me a little while to shift gears. In this case, from piecing a twin size top back to hand embellishing my journal quilt. 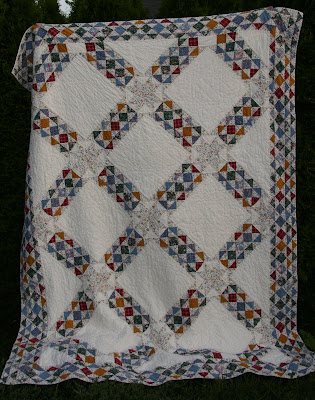 To tide you over while I recover from my creative lull I have decided to share with you a recent acquisition. I really feel like I scored with this one. DS and I were in our favorite thrift shop, just cruising as I recall. Sometimes I check out the linens, sometimes I don't. This time I did and I couldn't believe my eyes! Here was this mostly white quilt with all these triangles, hand quilted, and a price tag of only $10. Ten dollars!! I quickly pulled it off the hanger to inspect it more closely. I could see no tears, no popped seams, nothing to indicate why it had such a low price. I called DS over to help me. We stretched the quilt out between us and checked both sides. There was some kind of brown stuff on the back side but it felt like it might wash out. And the name Helen Roll had been clearly printed in one corner on the back. No date, just the name. But no damage anywhere. I promptly rolled it up and carried it to the checkout counter.

The gal working the cash register was new to me; we visited a bit while she rang up my purchases (I think we picked up a couple of other small items on that trip as well). Then when she went to put the quilt into a bag for me she caught it with the tip of her ink pen. Of course it left a mark. Arrgh! She tried to assure me that it would wash out, blah blah blah. Well, I knew the quilt would have to go into the washing machine as soon as we got home anyway so I tried not to stress over it.

I put the quilt in the washing machine with just a little trepidation and my current favorite laundry soap by biokleen. I set the machine for a short agitation and a soak cycle. When the washer was done I popped the quilt into the dryer without even looking at it. If anything had gone wrong there was little I could do about it at that point. I had the surprise of my life when that quilt came out of the dryer. Not only was the ink gone but so was the brown stuff on the back and the whole quilt was brighter, whiter! All of the stitching was still intact as well. Finally I sat down with the quilt to have a good look at it. 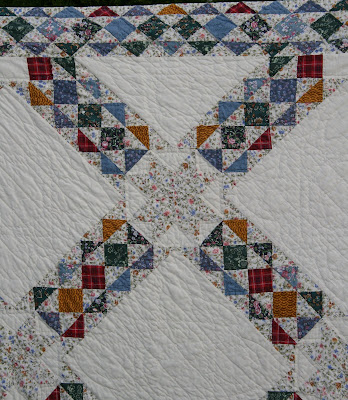 An awful lot of the prints looked familiar to me. Not anything I specifically had in my stash, but of the era when I was stash-building. I'd bet money I could identify where some of those fabrics had come from in fact. The top appears to have been machine pieced by someone who knew what she was doing in that department. The hand quilting sort of threw me though. It's not of the same caliber that the piecing is. There seems to be a pattern in the big open spaces, but at first glance the quilting looks very random. There are lots of stitches, but they are not evenly spaced or even close together in some cases. I eventually concluded that perhaps the top had been pieced by a daughter (or younger woman) and hand quilted by her mother (or an older woman). My own MIL had created quilt tops for her mother to hand quilt in her last days just so her mother would have something to do. I strongly suspected this was a similar case. Then it occurred to me that the name on the back was probably for identification of ownership rather than the signature of the maker. There was no date after all, just the name, very clearly printed in large letters on the back. Could it have gone with the older woman into a nursing home?

A few days later I found a short obituary in our local paper for Helen Roll. Sure enough, the quilt had been hers and had been donated to the Humane Society's thrift shop at her death. Kind of sad that no-one in the family wanted it, but a real treasure for me. It's just the right size for snuggling under on the couch with a book or a movie on TV. The batting has lumped up in some places but that doesn't bother me. The quilt has history, some of which I figured out, but still has enough life left in it that I can use and enjoy it rather than merely conserving it. A happy ending all the way around!
Posted by Magpie Sue at 10:28 AM