I hadn't realized it's been almost a week since my last post. No wonder I couldn't remember what my last post was about! I'm still trying to make peace with my new phone/camera, which is another factor in the delay. Progress is being made but it's frustrating. I'm not technologically inclined. That which is meant to be intuitive either isn't for me or is so obvious that I overlook it.

So, when last we met I was in the process of building a quilt out of my Parts Department. 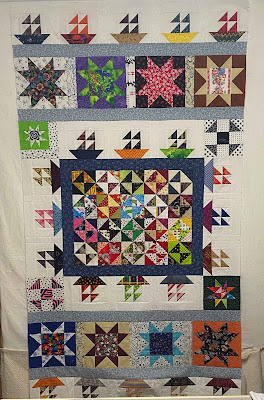 I found another remnant to use for the sashing down the sides. There was even enough to make sashes between the Shoofly blocks I used down either side. First one side... 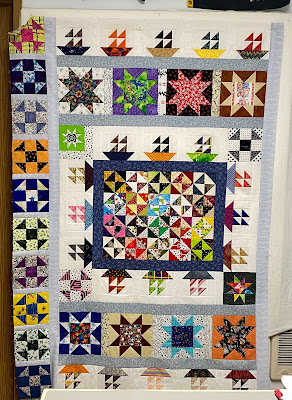 And then the other: 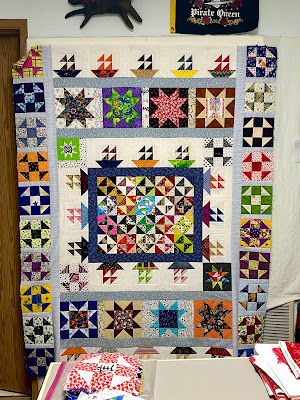 I had to audition several prints to find something to use for the outer border. I never expected it would be a stripe! 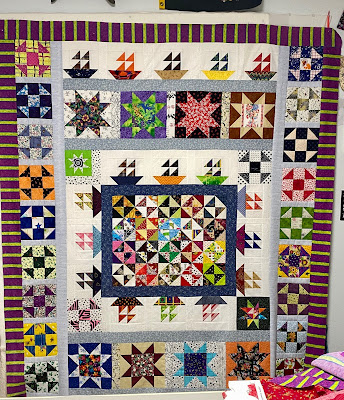 Mitering the corners wasn't going to happen although I did briefly consider cornerstone blocks. The border strips are only 3.5" wide so I discarded that idea. At this stage the top measures about 58" x 75," plenty big enough for a youngster to snuggle under.

From the side, so you can see more of the whole. 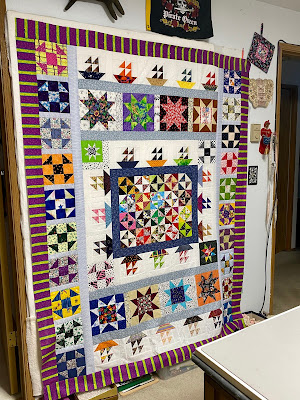 I made an effort to keep this from becoming a directional quilt with a definite right-side-up or down. Mostly I succeeded. The back has a couple of directional prints pieced into it however. I think I used six different prints to get a back large enough for long arm quilting. I didn't think to take any pictures though, sorry. The front of this eventual-quilt was more fun to piece than the back, I have to say.

I have other projects I need to catch you up on. Hopefully this process will get easier or more comfortable for me soon. 😏