Apparently, ever year Susan over at Desert Sky Quilting challenges her readers to make a block a day during the month of December and then turn those blocks into a quilt top during the week between Christmas and New Year's Day. I'm sure I must have read about this effort in the past but it's only been this year that it has struck a chord with me. You can make any type or size of block you wish and do whatever suits you with the resultant quilt top. She happens to be making blocks for American Hero Quilts.

Her post (back at the end of November) caused me to pull out the box of Christmas Parts. A few blocks, remnants from past Christmas projects, and three pre-printed panels from the 1990's (the last century!). The idea back in the day was to make a Christmas quilt for each of our three children. That never happened. I do have a couple of Christmas quilts courtesy of block exchanges I've done with friends in the past, just in case you were worried that we were deficient in that respect. So at this point I figure I'll make one more Christmas quilt for us and then when I'm gone each child can choose the one they want for their inheritance. At least, that's the plan for now. 😉

Two of the panels I've stored over the years are identical. I know one son expressed an interest in it when he was a boy so I've chosen that one to work with for my Advent project. 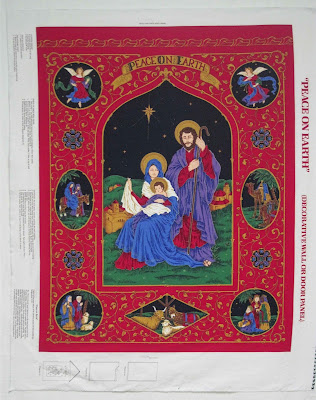 This is a craft panel, meant to be a small-ish wall hanging. 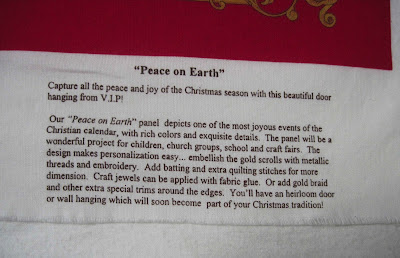 However, I always saw it as the focal point in a couch quilt. I just never knew quite what how to pull that off. Now that I have years of experience under my belt and a live-in long arm quilter at my disposal some of the previous issues have been resolved. For example, the large open areas that will be created by the block I've chosen to use around the panel can be filled in with lovely quilting done by my son! 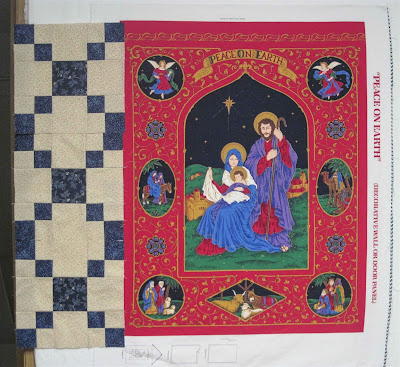 I already know it's unrealistic for me to expect to actually make a block a day but my goal is to make six or even seven blocks over the course of each week. So, one block one day and maybe two or three the next. 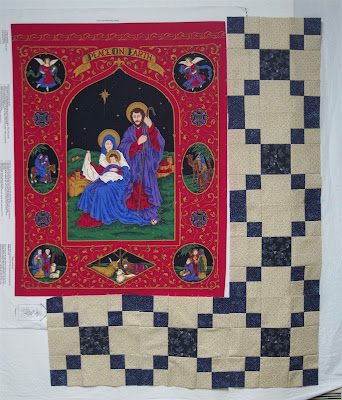 You can see I've chosen a fairly simple block, although it does contain the possibility for errors. I even went so far as to purchase yardage specifically for this project (!) rather than trying to make do with what I have on hand.

Since I have completed (I think) my gift sewing I found myself between projects as it were. This Advent project prompted me to think about the other Christmas panel and what I could do with it. I have pulled it out and trimmed it and am now considering my options for building it up to couch size. I'm not going to worry about keeping to a schedule or deadline for it but I do like the idea of a block or two a week as a goal. Unless, of course, it takes on a life of its' own. There's no harm in having a Christmas quilt top finished in February after all. That will make for two new Christmas quilts next year, one for our collection and one to give away. 😊