Bee, Myself & I is for selfish sewing, instigated by Carla. I generally have a hard time sewing for myself. When I know there's someone in need or a deadline to be met it's easier to stay out of the Pit of Inertia. However, every once in a while a project comes along that really speaks to me. Such was the case with the Rainbow Blur quilt I saw in our LQS window a few weeks ago. I downloaded the free pattern, my sister donated funds for the fabric as an early birthday gift, and I've begun cutting. This could be a quick project but I prefer to savor it as long as I can. I know when I reach a certain point I'll very likely make a mad dash to the end but for now I'm taking my time, using this for my end-of-the-month BM&I post.

My version of this quilt has been christened Botanical Blur, at least for the time being. That's because I'm using botanical prints from the Kaffe Fassett Collection. This includes prints from Philip Jacobs and Brandon Mably as well as Kaffe. This is the stack of prints I brought home from the quilt shop: 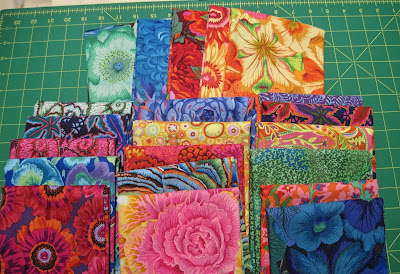 My first cuts were out of the largest scale prints. They are 15.5" squares. I got into difficulties when I tried to center certain images with my 12.5" square ruler and an additional 6" x 12" ruler. Fortunately, James has a 20.5" square cutting ruler in the house which I borrowed. Even though parts of the ruler extended beyond my cutting table it made the job easier overall. I only need five of these largest pieces but I cut an extra one just for the heck of it. 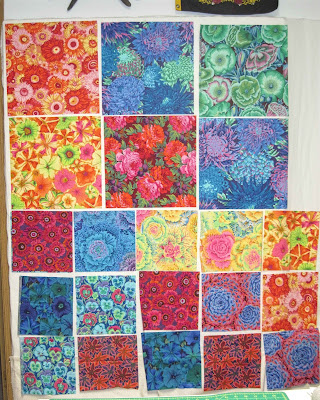 I've also cut more than I need of the next size down, 10.5" squares. There are 15 in this picture, which is the number called for in the pattern, but I've got doubles of some of the prints in that size. The next step will be to cut the 5.5" and 2.5" squares. I need quite a lot of those relative to these larger pieces. I'll be using smaller scale prints and probably cutting strips and then sub-cutting rather than trying to fussy cut anything. Let's hope anyway! There's a difference between savoring the process and getting stuck in the process afterall. 😉