Being of an impatient nature I'm not going to wait until next month to show you what's been happening with the quilt I started for Scrap Happy Day this month. 😉

Kate commented that the Card Trick block I'd placed in the upper left corner of the layout really stood out, and not in a good way to her eye. I trust Kate's design sense after seeing many of her quilts develop. Her perception of the colors in the block was not accurate, whether due to the photography or a difference in our computer screens. However, we don't think it was the colors in the block so much as the brightness or intensity of those colors that was the problem. 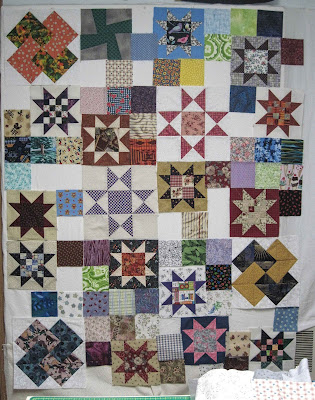 To be honest, the gold and blue Card Trick block down on the right side was bothering me too, I think for much the same reason.

I've been fussing around with the 12" blocks in my Parts Department since then. There aren't that many that work in this palette. I did try this Shoofly Star though.


Eventually I decided to just make another Card Trick block but with a more muted background than the white-on-white I used in the first three blocks.


I've also been filling in around the larger blocks with more 4" patches and making the 4 Patch blocks the pattern calls for. I tried moving the Card Trick blocks around within the layout but they still seemed to stick out in that upper left corner. 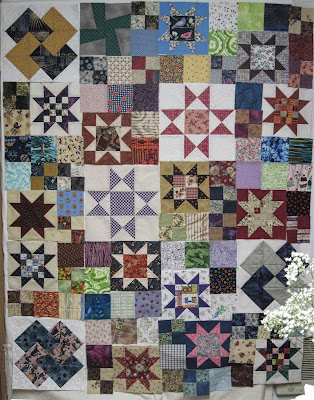 So in the end I've put the star back up there and removed the gold and blue Card Trick block altogether. 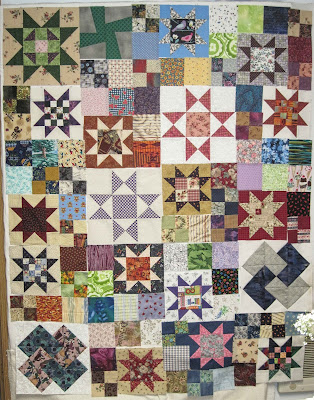 At this point I think I've got a layout I can live with. I'll let it sit on the design wall overnight and see if I still feel that way in the morning. This is the sort of thing I could spend days playing around with so if nothing jumps out at anyone else I'll probably start sewing it together. And now I have two Card Trick blocks to add to the Parts Department!