Scrappy Stars from June to October

We have been fortunate in this household that the cold our son brought in hasn't been terribly virulent. When I started to feel more like myself again I put my light batik and hand-dye stars back on the design wall. Eventually they ended up in these positions: 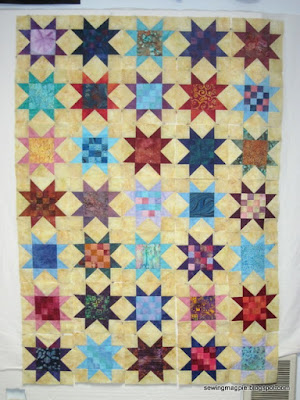 These are the stars that were inspired by the packet of hand-dyed fabrics I won in June. They are 8" finished, so at this stage the top would have been 40" x 56." Here are the brown background stars I made to make the top bigger: 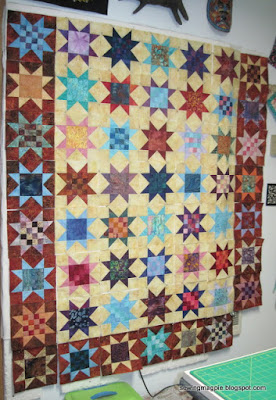 You may have noticed that the top row isn't in place. I have blocks set aside for that and am hoping they will look good when I finally shift everything downward. Two of the stars I showed in my last post have been remade. I just couldn't live with them the way they were. Now I'm not even sure which two stars they were!

These blocks have been on the design wall for several days now. Tweaks have been made to block placement during that time. For example, the dark star in the center right column below had to be taken out. 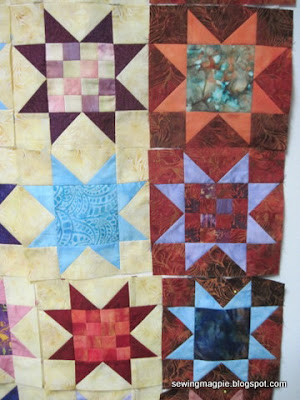 I replaced it with one from somewhere else in the border. 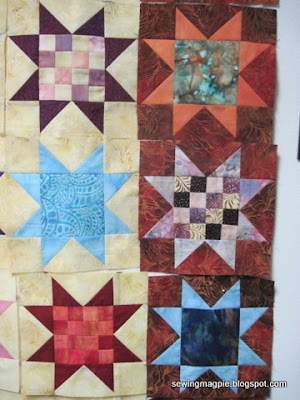 Actually, I think the two stars I changed are the bottom two you see on the left in the photo below. 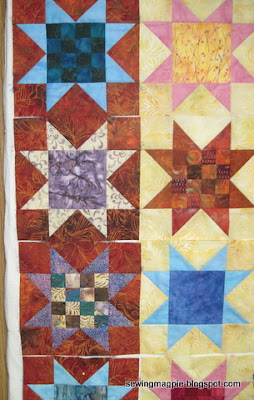 Now I have the top arranged thus: 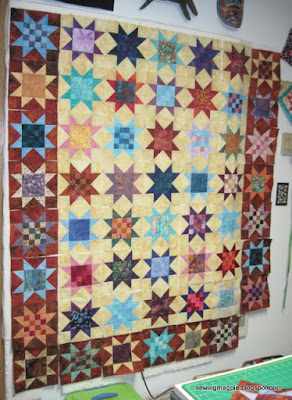 The block that goes in the corner is on the floor. There's nothing to pin it to in that spot!

I hope to get this sewn together early this week. We've had to do some serious moving of furniture and junk in the house or I'd have it done already. Hopefully I'll be able to show you why things had to be rearranged very soon. :- )

I'm linking up (at the tail end again!) with the other RSC bloggers over here.
Posted by Magpie Sue at 3:06 PM