Returning to an Old Love

I have been involved in one form of needlework or another since grade school. I started with simple embroidery but moved on to latch hooked rugs during my teen years. Then I discovered needlepoint. That's how I spent my leisure time during my twenties. Well, it was my medium of choice. In my experience needlepoint was always one of the more expensive forms of needlework. I didn't often have the funds for all the stitching I would have liked to have done!

I was busy having and raising children during my thirties. The sharp needles and scissors and expensive wool yarns were put away. Gradually I acquired rotary cutting tools and started piecing. As the children grew so did my piecing skills. I still couldn't indulge as much as I would have liked. Time was the issue more than money in this case however.

Faithful readers know that I still enjoy bouts of hand sewing. So far my plans to continue with a personal beading project this year have not born fruit. Since my last post I've been stitching down bindings. Apparently that was insufficient. A new Keepsake NeedleArts catalog came in the mail one day and I found myself ordering a nifty pair of swordfish embroidery scissors and a small needlepoint kit. (I do not need another pair of little scissors, but these were just too cool to pass up!) The kit was for a coin purse/credit card case: 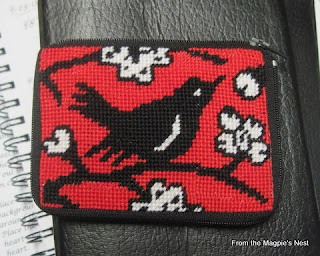 The beauty of this little project is that it comes pre-finished. With a zipper all the way around the needlepoint canvas all I had to do was stitch between the lines. I amazed even myself by completing the stitching in a matter of two or three days. And that wasn't enough! I'd cleaned out most of my old needlepoint canvases and projects over the decades but I knew there was at least one still lurking in the depths of the studio closet. It took a while but I finally found it: 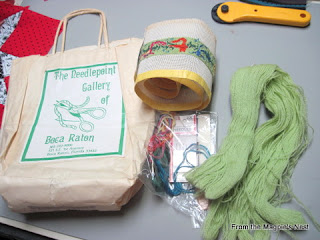 I don't remember where I acquired this. I certainly was never in Boca Raton, Florida! My best guess is that I picked it up in a shop when I was living in South Carolina. Which makes this project potentially 35 years old. There were two slightly rusty needles still threaded with floss in the bag. The canvas had been rolled up for so long that I've been having to fight the scrolling ends to do the stitching. You can see that the tape that came on the canvas has dried out and fallen off. I have a raw spot on my hand where I keep rubbing against that rough edge. (Maybe I'll tape that back up today...) 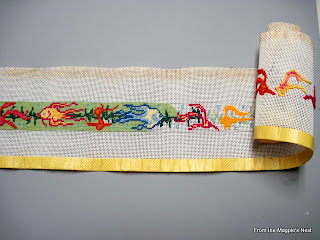 This was meant to be a belt when completed so the design area is only 1.25 inches high and 34 inches long. 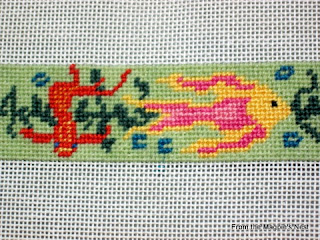 All the fish have been stitched, although some need their eyes put in. There's a bit of seaweed yet to be stitched at the far end of the canvas. 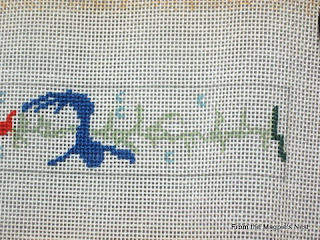 The fish, seaweed, and bubbles are stitched in cotton floss. The background is a wool yarn. When I pulled this out there was maybe five inches of background stitched. Now I've covered nearly 20 inches. My family will tell you that I've been stitching almost compulsively. I have no idea what I will do with this when the stitchiing is done (in another day or two!). While I could use a belt I doubt it will actually be made into a belt. Meanwhile, I've been back through the catalog to have a closer look at other needlepoint projects... ;- )