Bears and Ducks and Scraps, Oh My!

Back in the early days of my quilt making career I had a goal to someday make one of these Bear's Paw quilts: 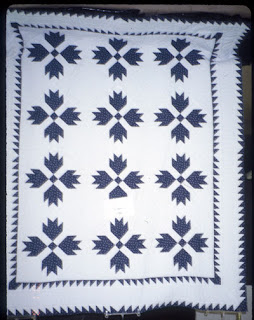 Suffice to say it never happened, and probably won't now because I've evolved as a quilt maker. Not that I could ever have made that many half-square triangles in only two fabrics!

Recently I ran across a picture of an antique Duck's Foot in the Mud quilt. It struck me that the pattern was very similar to the Bear's Paw, and that made me wonder exactly what the differences might be. The best way to find out? Make one of each!

I was able to rustle up sufficient scraps from my stash to make one 12 inch Duck's Foot in the Mud block per the directions in the old magazine. 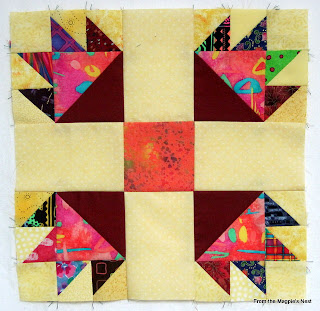 Next I drafted a pattern for a 12 inch Bear's Paw block. This time I cut patches specifically for the block. 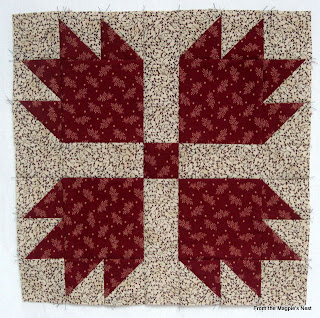 The two significant differences? A Duck's Foot starts with two large-ish HST's while the Bear's Paw begins with a whole square. The other difference is that the sashing between the duck's feet is wider than the strips that separate the bear paws. I think Bear's Paw is most often made up in only two colors. I've only seen the one Duck's Foot quilt and it appeared to have been made from a limited number of prints which could have come from a scrap bag. I thoroughly enjoyed making it out of scraps. I'll have to keep it in mind as I try to use up scraps in the future.

Meanwhile, between piecing the seams of these blocks I was sewing together the triangles that come off my flying geese units. 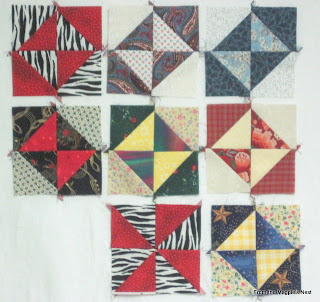 I really like flying geese units made from rectangles and squares as leaders and enders, and when I run out of them I have the triangles to turn into Pinwheels or Broken Dishes!