So after working on that medallion quilt with a variety of block patterns I needed something nearly mindless to sew. What could be more mindless than string blocks? I didn't even try to keep the central starter string the same color or value (although it often ended up being a dark print). 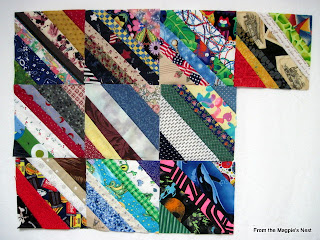 I started with six inch blocks. It was fun to play around with the various setting options. 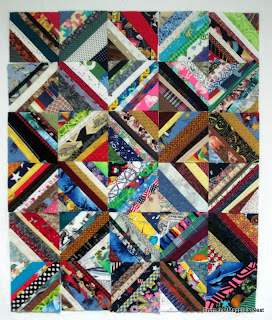 At some point I realized that I could switch to eight inch blocks and use both sizes in the same quilt. So I did! If you look very carefully at the photo below you may be able to pick out the two rows that are made up of 8" blocks. Of course here they're just raw blocks on the design wall: 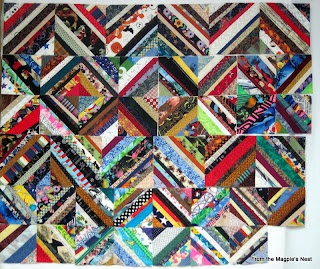 I tried to make a zig zag set work... 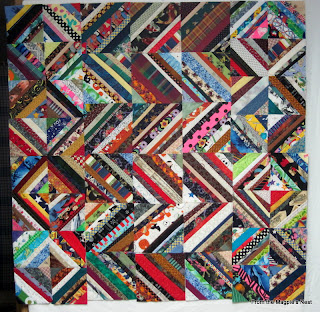 But I liked the more common setting better. I have all the six inch blocks squashed together in the middle of the quilt and the 8" blocks were added to opposite ends to add length. The top finishes at about 48" x 62" (outside! In the sunshine! Woohoo!). 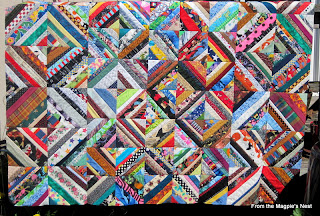 The one thing you may be interested in that I did differently with this project was to piece my strings right onto batting rather than other fabric or paper. I cut my batting squares from those strips that get cut away after quilting, and I cut them at exactly six and eight inches. Then when I trimmed the blocks to size I worked from the backside so that I could easily get a quarter inch seam allowance all the way around. I was a little nervous about sewing these bulkier blocks together but it worked out okay. The real trick was pressing the seams. I chose to press them open. My stiletto was crucial to this process! 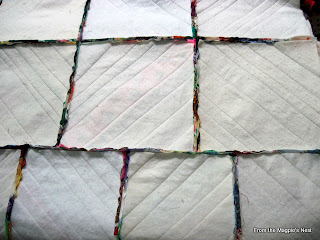 If I were to do this again I might consider leaving half inch seam allowances. Of course that would mean leaving the strings hanging over the edge of the batting squares by a good bit before trimming. In this case it was worth it to me to take the time to press these seams open because my plan is to lay this onto the backing fabric and secure the layers together by using a wide stitch on my sewing machine to decorate the seam lines on the front. Once I choose which stitch and what color thread to use that should also be a fairly mindless process!