Creating From the Parts Department

You know I've complained that my Parts Drawer is overflowing. I finally decided to do something about it. Of course there wasn't a block in there that felt like the right one to begin the medallion quilt I wanted to make! So I stitched up a 12 inch Twin Star just to set the stage for the rest of the quilt. After some fiddling around with various options I used 3.5" x 6.5" flying geese units and four 3.5" squares to enlarge the star: 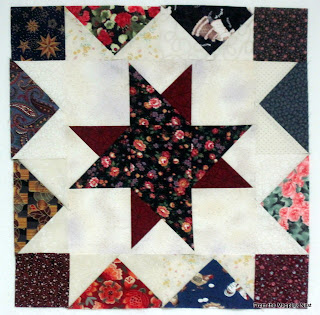 All that contrast between light and dark really sings, doesn't it? :- ) I struggle with achieving contrast most of the time.

My first choice for the next round was 9" liberated stars: 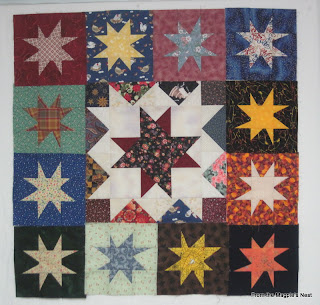 It didn't really work for me. Too crowded or something. So then I got out the bags and bags of 6" Shoo-fly and Hole in the Barn Door blocks and played around with them on the design wall. I tried all Shoo-fly blocks around the star, I tried Barn Door blocks all around... This is the configuration I liked the best: 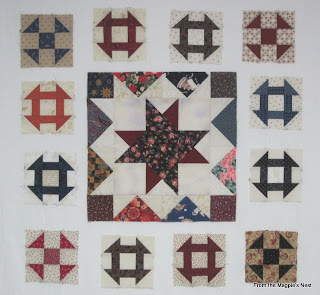 All those 6" blocks had to be framed up to 9" in order to fit nicely around the now-18" Twin Star block. I didn't have a lot of 2" strips already cut but it gave me the opportunity to make some, using more of those old prints, and to use a few of the 2" bits I'd pieced into strips between the seams of other sewing. (Two inch strips finish at 1.5", and 1.5" added to either side of a 6" block makes a 9" block.) 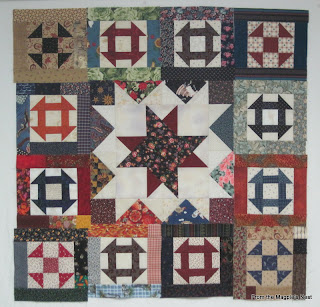 At this point I was really happy with the way it looked. You should be able to super-size the pictures by double clicking on them. But since this was intended for an adult it had to be bigger. Time to get out the 9" liberated stars again! 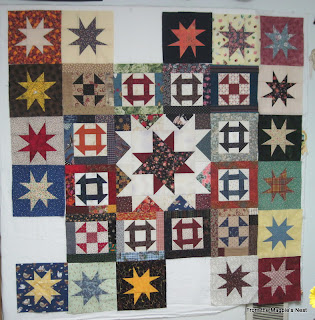 I'm not saying this is what happened next. You'll have to come back in a few days to see the end result!
Posted by Magpie Sue at 9:34 AM