You might want to get a cuppa your favorite beverage... I have been busy! 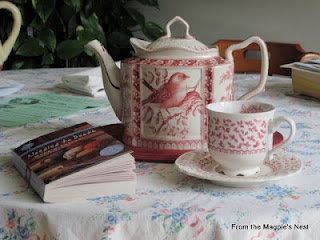 Actually, I had a few days where I was unable to function. Then, in desperation, I paged through my Gwen & Freddy books for color and inspiration. This "Housetop" quilt caught my attention. 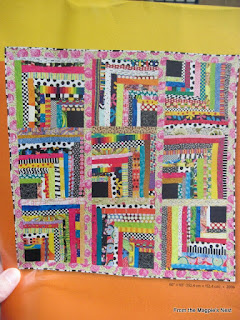 I needed something I could do without too much thought or effort. This looked do-able and these 4.5" patches seemed like a good place to start. 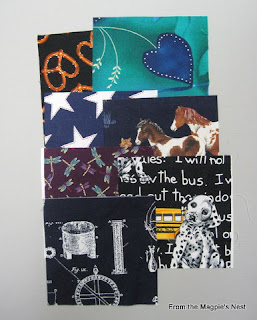 Making a quilt of chevron or half log cabin or housetop blocks has been on my list of Quilts To Make for years. I gave myself permission to let this be the first one, and to let it be as scrappy as it needed to be. In two days I had seven blocks built up and trimmed down to 18.5," which is the size Gwen & Freddy used for their version. 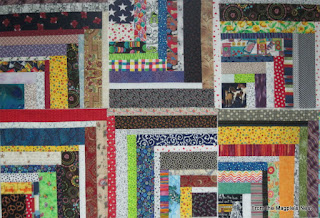 Seven blocks was either one too many for a baby quilt or not enough for a larger person's quilt. Before I had made up my mind what to do my friend C~ talked with me about the need for quilts for the young men in the Foster Care system. Our local quilt group makes plenty of baby and child size quilts but the teenagers tend to get left out, especially the young men. So I decided to make five more blocks, and to try to skew the blocks masculine and older. This was not easy to do! I don't have a lot of florals in my stash but I do have a preponderance of feminine and juvenile prints - at least in my opinion. Eventually I had twelve 18.5" blocks though. 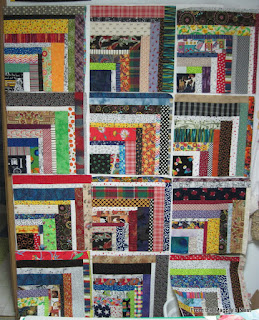 The second set of blocks were started with five inch patches, not 4.5," just because. I also tried hard to make them very dark. The upright sashes between blocks were cut from assorted 2.5" strips but all the horizontal sashing was cut from one print. 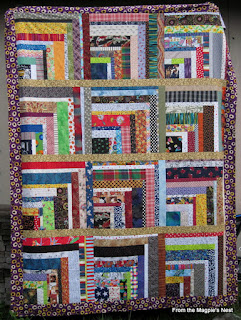 It took some doing to find an appropriate print for the outer border. I had just the right thing in my stash though. The gold in the horizontal sashing is reflected in some of the circles on the purple print. Woohoo! 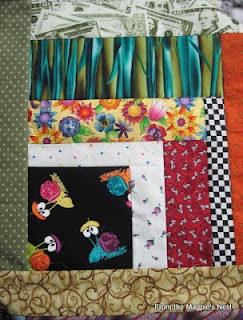 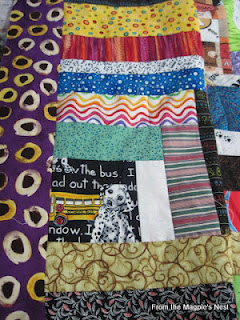