Kind of ironic that after I posted the link to the NY Times photo essay about folks living with MCS I had a really bad week physically. There was just one toxic exposure after another, and unavoidable for the most part. It gets discouraging. I appreciate the support I've received from my blogging friends.

You may remember that I recently purchased a new sewing machine. It would have been too much to expect that Phoebe's bobbins would fit Ruby Blue (even though they are both from the Pfaff family). One thing I managed to do in the last week was to start sewing together 1.5" strips using the thread on the old bobbins for those short seams. 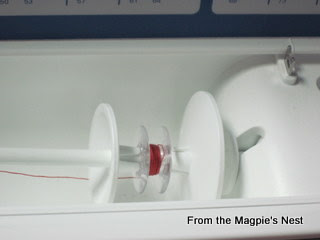 It was restful to sit and sew mindlessly while I chain pieced the strips in pairs. 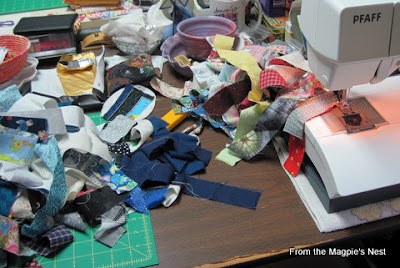 And then the whole lot went to the ironing board. 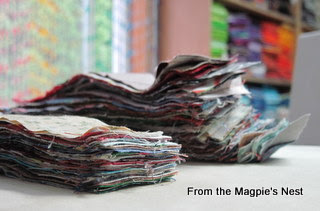 I've been cutting my strips to 12.5" in length. I'm not sure I'm going to sew them into 12" blocks though. It didn't occur to me at first that it would take 12 strips to make a 12" block (duh!). When that finally dawned on me it didn't sound like so much fun. Since then I've had an idea to use columns of three or four as vertical sashing in a strippy set quilt. 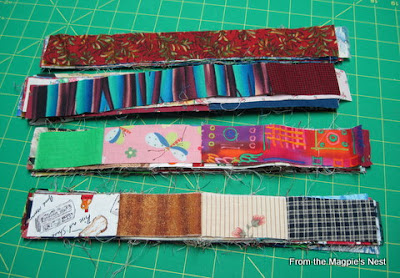 Since these were pieced I found another stash of 1.5" strips I'd forgotten about. I still don't have much of a brain for creative problem solving so I'll probably keep emptying bobbins and add these growing piles to my Parts Department for future use. I'm going to have to find an appropriate container to keep them in though, so they can be put out of the way when my brain finally kicks back into gear. ;- )