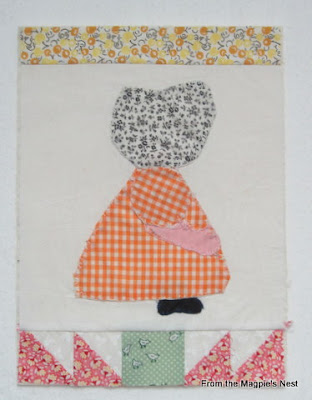 The Sunbonnet Sue block was hand appliqued by a friend of mine in the last years of her life. I have about four of these blocks. Long-time readers may recall that I added the top and bottom borders with the intention of turning this into a Priority Quilt for the Alzheimer's Art Quilt Initiative. I finally made good on my promise. :- ) 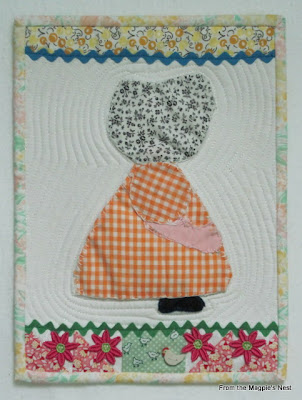 For the longest time I couldn't figure out how to quilt the piece. Quilting is not my strong suit. All along I had a voice whispering in the back of my head that I should just echo quilt it. In an ideal world I would have hand quilted it. I feel the block deserves that but it's just not my thing (nor is applique for that matter). Yesterday I gave in to the voice but used an iridescent thread to bring this traditional block into the 21st century. After that it was playtime, adding the rick rack and flowers. 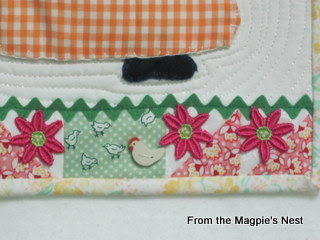 I had to give the chicks a mother hen to watch over them too. I did not embellish Sue's hat or dress, preferring to let Arlyne's work stand on its' own. I've titled this "Ripples of Friendship." The registration form has been submitted; I expect to get it shipped in time for it to go to Houston if that's what the powers that be decide to do. In the meantime, there are some pretty spectacular quilts up for auction right now. The auction ends in a few days, you should go check them out now!