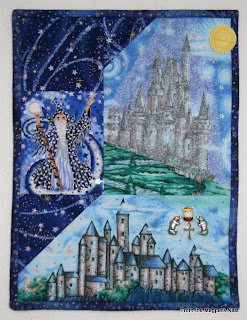 I have tried to load the pictures so that you can click on them to see a larger image. Below is a detail shot of the charms I used to recreate the main elements of Ankh-Morpork's shield, indicating that the buildings you see represent the city of Ankh-Morpork. You may also be able to see the seed beads I've used to secure the top layer of fabrics to the batting. 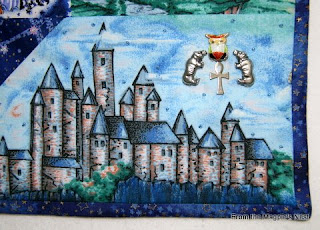 I do all my embellishing through these two layers. The batting (Warm & Natural) provides stability. My backings are added last. They are secured by the application of the binding and an occasional tacking stitch through to the front. 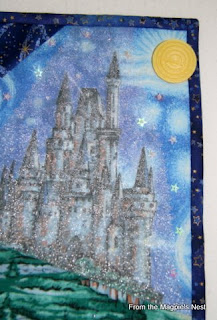 Here we have the University itself. You may not be able to see the irridescent seed beads I used to secure the sheer fabric. I had a hard time seeing where I'd put them as I was adding them! 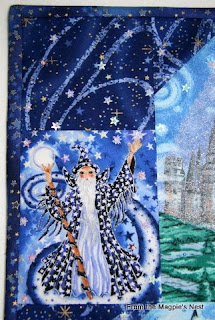 And finally a wizard. This one is a little more elegant than I picture the wizards of Discworld but it was the best I could come up with. I picked up on the star elements in the background of the wizard print and used star sequins to secure the background around the wizard and the University. All in all I'm pretty happy with the way this turned out. :- )
Currently my plan is not to send this to the AAQI, but rather to send it to the first ever North American Discworld Convention being held in Phoenix over Labor Day weekend this year. They are holding a charity auction during the event to raise monies for the Alzheimer's Research Trust and for Terry Pratchett's favorite charity, the Orangutan Foundation. I do, however, have another Priority Quilt in the works for the AAQI...