Now that I've got the friendship blocks together (finally!) I'm not sure what I want to do about the border(s). In the back of my mind I've always pictured a simple whole-cloth frame of one fabric. In fact, I've purchased three different pieces of yardage for that purpose over the course of the last couple of years. I've already eliminated one as a possibility. The black & white print that was in my last shipment from eQuilter (in this post) is a little busier than I'd like. There was another black & white print I debated about buying when I placed that order. It was a larger scale floral print, sort of Jacobean in flavor. Now I wish I had that one instead. My other option at the moment is this pink stripe. 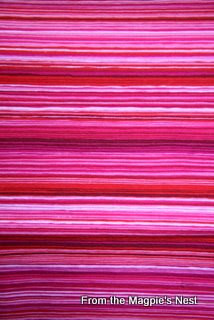 I like the stripe because it ties together all the different pinks in the blocks. Maybe I'll figure out a way to use both of them. I may have to invest in a nearly-solid black for an inner border. I'm pretty sure I don't want the border treatment to get too involved. Mostly because I'm basically lazy, but also because the top itself already has a lot going on in it.

In the course of assembling the friendship top I managed to sew up all the patches I'd cut previously into Bow Tie blocks. I've also made up a few more Shoo Fly and Churn Dash blocks and even some flying geese units. Building my very own Parts Department I guess. ;- ) 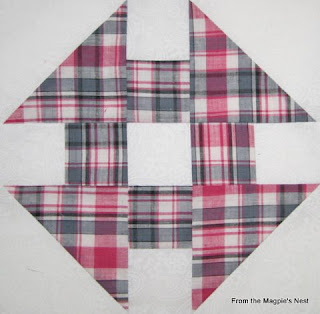 This is a 10" block I made out of some patches I'd cut years ago and just recently unearthed. 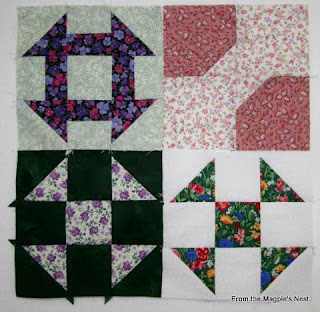 There are a couple of small challenge pieces I'm working on too. The Priority Quilt for Terry Pratchett has not moved forward at all but I have pieced another top in honor of another friend of mine who has recently been diagnosed with Alzheimer's (or some form of dementia). {sigh} I will no doubt be doing handwork again soon. That seems to be what I do on these small quilts. I had to venture out into JoAnn Fabrics this morning for supplies, and while I was there I picked up a copy of the premier issue of Art Quilting Studio. Toward the back there's an article showing the results of a challenge to make an 8" quilt/block based on something found in your purse. The next challenge is to use something in your refrigerator as inspiration. There's an intriguing idea! I don't know whether anything will come of it but I am seriously tempted to play along.