The Take It Further challenge for November was to use typography as inspiration. You may recall that I had quite a bit of fun doing research for this challenge. You may also recall that I said I hoped to make this month's challenge postcard quilt do double duty as the second embroidered piece for the Sumptuous Surfaces class I'm taking. Ha! How many of you guessed that that little plan would fall by the wayside? Gold star on your forehead if you did because you're right.

I got stalled on my monochromatic piece for the Surfaces class because I needed to refresh my embroidery skills. To that end I put together a little band sampler... 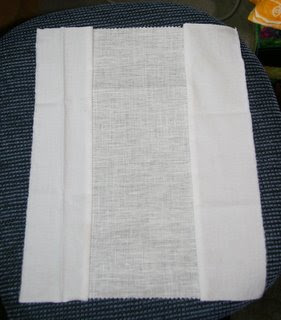 but have not taken a single stitch yet. Meanwhile I was playing with design ideas for both the TIF challenge and the color assignment for the Sumptuous Surfaces class. As Thanksgiving came and went I realized that there was no way I would even come close to meeting the deadline for the TIF challenge if I were to embroider it. The plans I had for a stitched piece were far too intricate to pull off in a pieced version. So I went back to Flickr.com and had another look around. There was one photograph that stood out in my mind, one that I really wanted to interpret in fiber. One that would also be very easy to piece. After a while I realized that I could, in fact, make it work for this challenge because the shape of the composition creates an 'L'. Voila! Typographical inspiration! You can see the photo here. And here's my version of it: 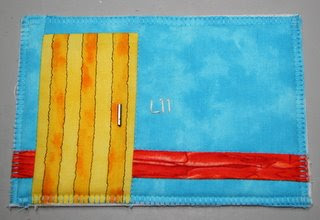 I have added the address designation "L11" in simple straight stitches to reference the typographical inspiration and the month of the challenge. The stitches themselves and the color I chose to do them in are the only two elements I might change if I were to do this over again. Black was too harsh, but the natural thread is almost too light. It's a bamboo floss that I have used in my monochromatic embroidery piece so it was right at hand, easy to use.

Now Sharon has posted the challenge for December: "For the final challenge of the year and since it is the gift giving season and many of us run ourselves ragged either making gifts or buying them I want to ask what is the idea of generosity to you. That is the theme for this month. So just take a few moments and think about what it is to give and how would you represent that visually." Oi vay!