It's definitely November here in the Pacific Northwest. It rained a bit Halloween morning but cleared up in time for the trick or treaters. The sun has managed to peek through a couple of times since then, but for the most part it's been gray and drippy. And thus it begins... {sigh}

After all the finishes during the last couple of weeks of October I've felt singularly unproductive these past several days. I still haven't tackled my Take It Further postcard for October, and now there's a new challenge out for November. I have a pretty good idea what I want to attempt for October's challenge; it's just a matter of sitting down and doing it. (Or getting up, moving away from the computer, and sitting down at the sewing machine!) I also have these blocks I am desperate to get off the sheet and into some sort of quilt top: 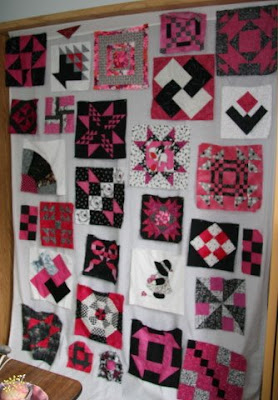 That sheet has been hanging in front of the closet for two years now. It's time to move on! It's in the way and I'm tired of it being in the way. I think my original plan for those blocks got sidetracked once I pinned them to the sheet. (If I'd been a little more diligent in keeping my studio journal back then - when I pinned those blocks to the sheet - I'd have a better idea what it was I was planning to do!) Now I'm just about ready to mash them all together like I did for my Orphan Train quilt and call it good.

Another obstacle in my path of late has been the piles of scraps that accumulated with the creation of my Fungly quilt, the Halloween quilt, the Alzheimer's quilt and the kitty quilts. Yesterday I finally began the process of sorting them according to which ones were big enough to go back into the stash and what needed to be dealt with in another way. I like the concept of the Floor Scrap quilts that are being made a la Gwen Martson. (here and here) I just haven't had the motivation to pick up two pieces of fabric and sew them together. Yet.
Soon, maybe even today, I expect the doldrums will wear off and I'll be sewing again. I may even put on my witch's hat to see whether I can channel any creative energy from it...
It's so nice having a hat that actually fits. I have a small head so it's rare to find one commercially that will stay put as I move around. I've heard of other artists who signal themselves that it's time to get to work by donning an apron... why not a hat? And why not a special hat?! Ooo, maybe I'll piece some fabrics together for my son to use to make the body of a special new hat! ;- )
Posted by Magpie Sue at 12:58 PM