It's Been a Busy Week!

It all started with a full day on the computer, doing research for the typography challenge for Take It Further in November. I played around with fonts and monogram arrangements for my initials, but eventually ended up on Flickr.com looking at hundreds of pictures of signs and then house numbers and the cornerstone/date blocks of buildings. There's some great stuff out there! Especially in England where they have really old buildings with stonework and carvings the like of which you don't see anymore. It was fascinating to note the different typefaces used in different time periods. I discovered that I am more drawn to numbers than letters. At least for the time being ;- )

If you go to Flickr.com along the top of the page you'll see a horizontal menu bar. 'Groups' is one of the buttons. Click on the tiny triangle and you'll get a drop-down menu. Choose 'Search for a Group' and then type in the word letters or typography or numbers or signs or whatever you can think of and you'll get a list of groups fitting that topic. Who knew there would be a group for "beautiful numbers?!" Click on the name of the group that seems the most fitting for what you're looking for and voila! hundreds of pictures to peruse. But be careful - I wasn't kidding when I said I spent a whole day doing research. Most of that time was spent on Flickr!

The next thing I tackled was my assignment for the Sumptuous Surfaces class. Everyone has designed their own piece to embroider and texturize. I chose to depict a house built into a sand dune. Sort of a hobbit hole if you will. This piece is to be done in a neutral monochromatic palette. I have the faintest touch of green in a varigated cotton floss I've used but other than that everything is pretty much the same color so far. 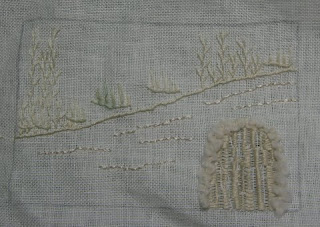 I've only just begun the stitching; there's a lot more to do. I keep thinking I need to introduce at least another shade (darker probably) but haven't succeeded in finding the right threads so far. Yesterday I went out to look locally and came home with another texture, but it's the same color. Oh well. 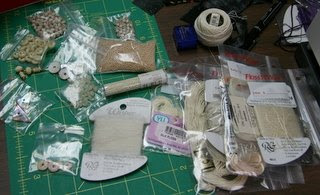 The next assignment will involve color. We don't get that lesson until next week or the week after though so I don't know what I'll be doing yet. I am severely tempted to combine that assignment with the November typography challenge though. How fun would it be to illustrate a single letter or number in color and texture?!
Posted by Magpie Sue at 10:46 AM