What I Did on Saturday 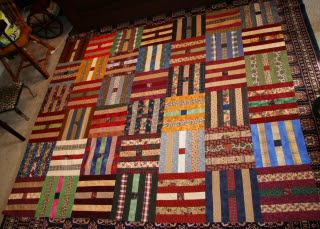 Ta da! The Lincoln Logs blocks are all sewn together!
This was the perfect project for me on Saturday because I had a bad reaction headache and needed a distraction. Sewing the blocks together was a fairly mindless activity. I had to take two of the blocks completely apart and put them back together again to make them big enough (the maker of the blocks had taken too deep a seam allowance), one block had a seam where one fabric had only been caught by a thread - literally! - so I took that seam out too and put it back together, and one block was exactly the right size and had to be taken in to make it fit with its' neighbors. When I spread the top out on my bed afterward I was dismayed to see an area with too many light fabrics in it for my taste. I had sewn the blocks exactly the way I'd laid them out on the floor; the problem just didn't show itself until they were actually sewn together. {sigh} What to do?

I thought about moving the offending block(s) but then I'd have to replace it with something from somewhere else. Y'all know what happens then! One thing leads to another and I'd have nothing but a pile of blocks again. I could make a whole new block but I didn't want to leave out any of the blocks my friends had made for me. I seriously considered the suggestion to tea dye the light blocks to tone them down. Eventually the idea dawned on me to just take out the light pieces in one or more blocks and replace them with something darker. I played around with the scraps I had until I found something I thought would work. Swapping out the two smaller light strips from one block made all the difference in the world. That was the only change I ended up making. Whew!

I didn't get to see the granddaughters on Halloween. But when I went over there on Friday Miss Margaret was dressed up in her princess dress and fairy wings, which was her Halloween costume and is currently her favorite outfit (of course!). SHE WAS SO CUTE!!!

And I forgot the camera.

DD has promised me a picture. They were here briefly yesterday but Margaret and I were too busy playing to get any pictures taken. Baby Susan played rag doll the whole time she was here, asleep in her mother's arms. At two months old she is the happiest baby I've ever seen. When she's awake she smiles and laughs and coos and gurgles. I feel like the luckiest grandma in the world!