It's been a long time since I've dropped any amount of money in a LQS (local quilt shop). Until this week, that is!

Because of my chemical issues I can't be in most fabric stores for very long. Depending on the shop, I can get foggy headed in 15-20 minutes. At that point I have a hard time making any kind of decision, whether it's how much of a fabric to buy or whether I want it at all. I might even begin to feel weak or excessively tired. I haven't been to a quilt show in some time either, to avoid the cloud of fragrances that crowds tend to create. As a result I have begun to do a little fabric shopping online. One can only go without new fabric for so long!

Fabric.com was having a sale on some flannels recently. The top two prints in the picture below are flannels from them that I thought would be fun to use in preemie quilts. The colors are pretty true to what I'd seen onscreen. Somehow, though, the bear print is even cuter in person! I checked out other sale fabrics while I was there and went for the teal dot print as well, but that was all. 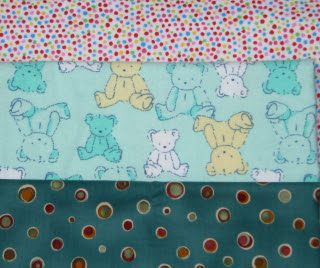 Thursday my friend C~ invited me to accompany her to a nearby city to check out the new Trader Joe's there (yeah!). I was happy to go given that I had fared so well two days earlier when I went to the mall with DD and her darling daughters. C~ and I did Trader Joe's and two quilt shops and the Salvation Army thrift store as well! I bought more flannel at the first quilt shop (the top two fabrics below) and apparently only four other pieces of cotton (seemed like more on the day). Actually, C~ paid for the piece on the extreme right. It's going to be part of a challenge we're doing with a few other friends of ours. Oh yes, there was one other purchase at that stop. It's a potential Christmas gift though so I won't reveal what it was. ;- ) 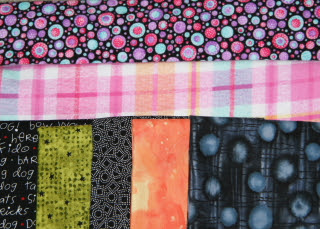 That shop seemed to be okay for me, healthwise. I waited too long to have lunch, though, and paid the price. But after lunch we hit the thrift shop and I scored two cool neckties (which I didn't think to photograph). Then it was on to the second quilt shop. I only bought one piece of fabric there. It's the print on the extreme left in the photo above. Lots of fun dog-related words and phrases for that doggy quilt I'm going to make someday.

Of all the places we visited that trip, the thrift shop was the worst for me. I tried to get in and out of there as quickly as I could but I had to look carefully at every tie!

The next day I had the opportunity to pick up Miss Margaret from her other grandmother and deliver her to her mom. I was feeling well enough on the way back home to stop in at a favorite quilt shop that I hadn't been in in a long time. This is a store where I'd be happy to just have "one of everything!" in the store. Exercising great restraint, I only came home with these prints: 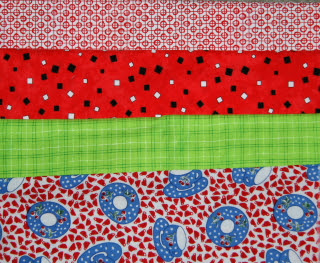 Two of them may go into another Christmas gift. The lime green was just for me, just because.

The shop had one more challenge packet left for their Quilt Pink 2007 block challenge. It contained these two prints: 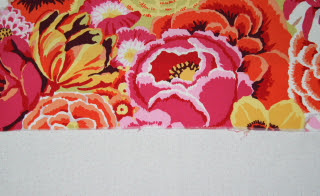 The white on the bottom is actually a pink mini dot. I bought a couple of the fat eighths the shop had preselected to go with the challenge fabrics too. Yesterday I made up one block for the challenge. It took a ridiculously long time to get that block made, and then I wasn't all that happy with it. It's not bad, but I know it could be better (and would have been better if I'd been thinking more clearly). Oh well. Today I've made up a second block from the leftover bits of the first block. Once again, it doesn't quite live up to my expectations but it is what it is. I may photograph them for you tomorrow. It will require good light and it's too late for that now.

Oh yes, there was one other print from that store: 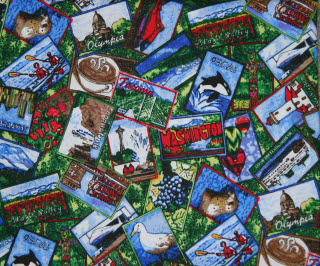 This was manufactured by In The Beginning especially for the western Washington shop hop this year. I'd never seen it before - that gives you some idea of how long it's been since I've been in that store; the shop hop is in June. I thought it might be fun to incorporate into things for relatives who used to live here but are now living in browner, dryer (and sunnier!) places. Which brings up the point that there will be things I'll be working on in the coming weeks that I will be unable to show you because they will be Christmas gifts and I'm not sure who's reading my blog and who isn't. With any kind of luck I'll remember to take their pictures and share them with you after the holidays!