I didn't track down the source, but apparently the question is floating around in blogland, "What's on your bed?" My answer is, "Not George Clooney!" Or Johnny Depp or Matthew McConaughey or anyone else exciting ;- )

No, Helen Roll is on my bed at the moment. At least that's what it says on the back of this quilt: 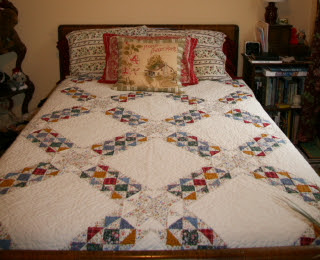 This is my $10 thrift shop treasure which apparently belonged to Helen Roll before she passed away earlier this year. It's a lovely warm quilt but it's only the top layer. Underneath it we have the pinwheel quilt which will go to Miss Margaret when she gets a little older: 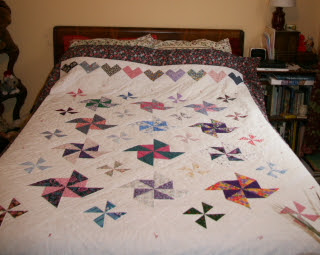 I'm not sure whether I've blogged about this quilt yet or not. The Double Pinwheels were made when DD was in elementary school. She picked out some of the fabrics that were used in the blocks. That project was put on the back burner at some point, to be lost in the mists of time. Last year (?) I unearthed the blocks and decided to make a quilt for DD's darling daughter out of them. Of course there were half a dozen or so of the big pinwheel blocks that were too small or otherwise unusable so I went back into my block stash and found some regular Pinwheel blocks exactly half the size of the Double Pinwheels. At that point I decided to put the pinwheels on point (this is turning out to be a very pointy story!). I needed a few more of the smaller ones to fill in the blanks and made sure to make them out of fabric from the same time period. Some of them were made out of scraps from the dresses my mother had made for DD. The center of the quilt needed to be a bit longer before I added the border so I created the primitive hearts. There's a row of them along the top and along the bottom (which you can't see in this picture). They include fabrics from Margaret's other great grandmother. The border fabric also came from that great grandmother. You probably can't tell from the photo, but I machine quilted around each pinwheel. Because DD is such a fan of tied quilts, and Miss M likes to twiddle them, I included ties of embroidery floss in the setting triangles around the perimeter of the quilt. It's not fancy but it's serviceable and that seems to be what I do.

I was really pleased to be able to include all of the women on this side of the family in Miss Margaret's quilt. Hopefully I haven't set the bar too high for future quilts for the other grandchildren!
Posted by Magpie Sue at 3:01 PM