That project I've been working on behind the scenes has been quilted, bound, and received by the intended recipient. Even better, she was over the moon with the gift. 😁

I'd been asked to make a quilt in the colors of the ocean to fit into a specific color scheme in a new house. A house I'd never been in I might add, due to my sensitivity issues. I chose to work strictly with batiks and used the Scrappy Trips technique from Bonnie Hunter (again!). Partly because it was this quilt of mine that inspired the request in the first place: 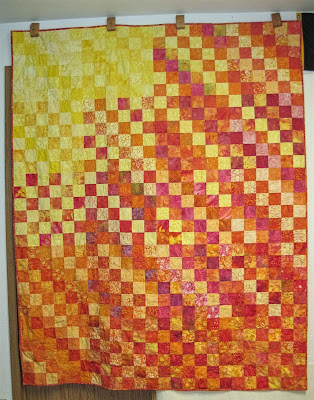 Whereas my quilt has the look of the sun and its' rays moving through the quilt top I wanted this new one to look more like waves washing up on a beach. It wasn't too hard to get started but after the first few blocks I got stuck. It took almost four years to get unstuck! I had to just gird my loins and get back to making blocks without thinking too much about how they were going to be set to represent the image I was after. To get going again I decided to concentrate on making tan blocks for the beach and deep water blocks of the darkest blues. Then I just played with the various teals and lighter values for the transition blocks. 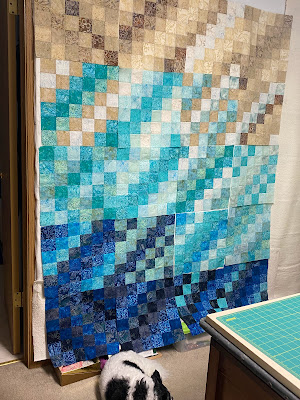 I ended up with that rather hard line of teal/blue at the bottom of the flimsy. Blocks were actually sewn into rows at that point. They had to be taken apart to soften that up. I also made an additional block using some of what I had left of the lighter value prints. 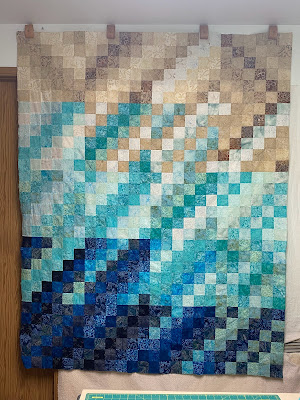 James had a chance to exercise a bit of creative freedom with the quilting of this one. Rather than an overall pattern he emphasized the movement of the water with his work. 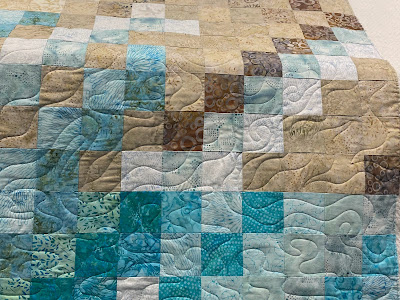 I bound the quilt with the same batik I used on the back. It's another batik in various tans, beige, and brown that I think looks like debris on a beach. 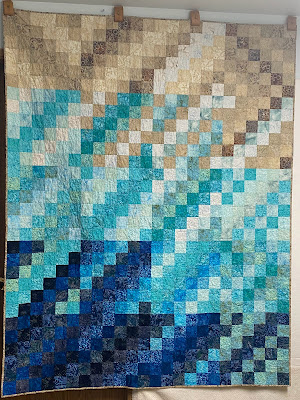 Unfortunately, all the lovely quilting James did virtually disappeared in the laundering of the completed quilt. It created wonderful texture though. 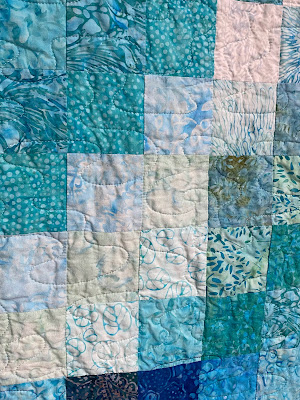 And now the quilt is in its' new home, where it fits in perfectly according to reports! 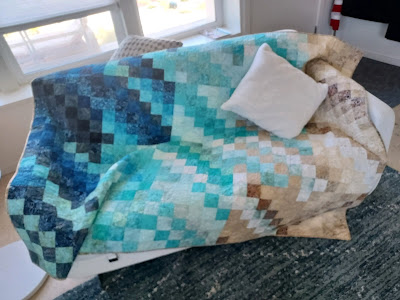