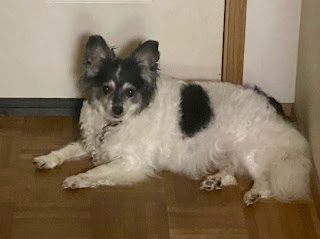 Much has transpired since my last post. We made the difficult decision to send Luna over the rainbow bridge. We never knew just how old she was as she was a rescue from one of our local shelters. She'd been with us for about seven and a half years if my reckoning is accurate. The first time our vet saw her he guessed her to be about four years old. At a later visit he revised his opinion of her age, thinking she might have been a bit older. Between that, and no hope of the seizures abating, it just seemed the best thing for her. Needless to say, I have felt her absence keenly. It didn't help that her last trip to the vet was on the day before my birthday. Fortunately, my SIL sent me a 1,000 piece jigsaw puzzle as a birthday gift. I hadn't done any puzzles for a long time but I do enjoy them. This one was rather daunting. 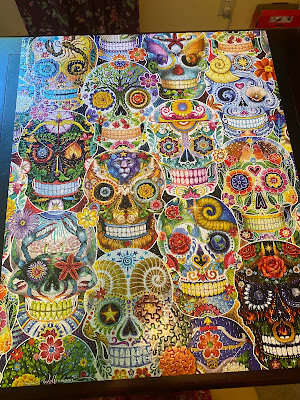 The colors and the subject matter appealed to me, as my SIL knew they would. 🙂 Working on this provided just the distraction I needed in the days after Luna's passing.

I have also been sewing. The annual fundraising auction for our local hospice organization will be held in September. I figured there was time to get a quilt made to put into the auction and settled on a blue and white color scheme. I chose a block design I hadn't made previously - but it's only a slight variation on a Bear's Paw block. It's called Doves in my block book. So far I haven't found another name for it. 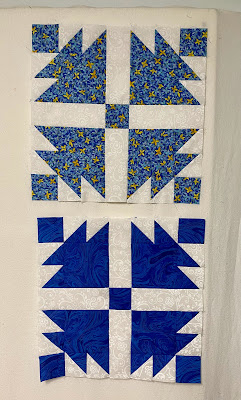 I don't really see doves, but then, how many traditional pieced blocks actually represent the things they were named after?  My original plan was to make 16 blocks and sash and border them for a square quilt. 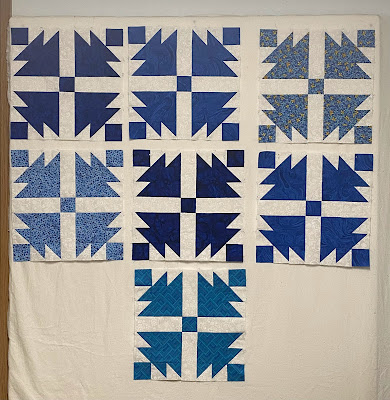 However, when I finally had 16 blocks made I didn't have enough of the white-on-white fabric I'd been using for background patches to go that far. Also, there were a few blocks that didn't seem to fit in well with the others. 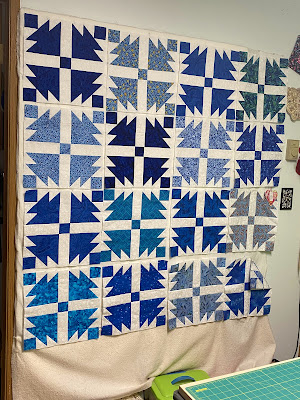 Even culling the collection to 12 blocks didn't leave me with enough of the WoW to put a frame around the flimsy. 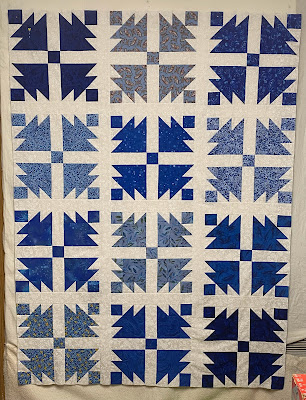 I searched and searched for more of that specific print and finally found it through Amazon.com of all places. There was no information as to manufacturer or designer on the selvedges. I had to buy 108" wide backing fabric to get the print I wanted. This project will be set aside while I wait for that yardage to be delivered.

There are other projects and plans in the works as well. Hopefully I'll get back into the swing of things and post here a little more frequently in future. Let me offer my apologies to one and all for not following up on your kind comments lately. I do appreciate it when you leave comments. I just don't often have the psychic energy to respond to them. 💙