Back in 2012 I tried my hand at a traditional block that was new to me. It's called Four Crowns in my block guide. Probably there are other names for the pattern. There are more pictures and information about it in this blog post. 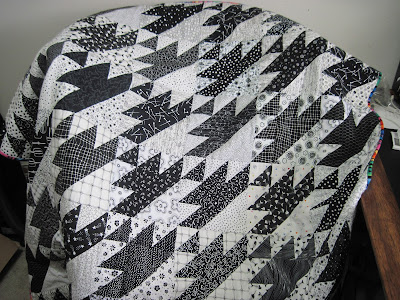 I don't even remember when I decided to have another go at this pattern. I suspect at the time I was trying to use up some batik remnants. Just playing around, making blocks for the Parts Department. 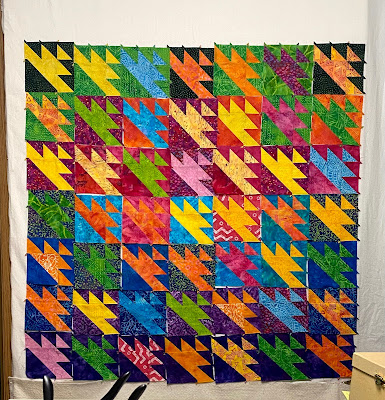 This time that straight set didn't work as well, at least not in my eyes. So I tried out other arrangements and decided to do something along these lines: 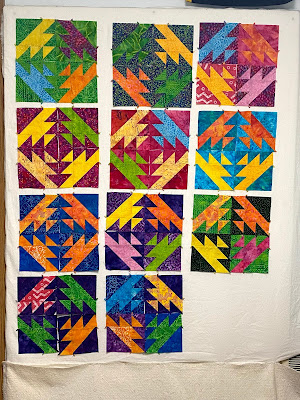 There weren't enough blocks for a quilt of any size so I've been making more. Rummaged through the batik scraps to see what might be left over from the first session. I found a few but had to introduce new prints along the way. Now I have enough 6" units to make sixteen 12" blocks. 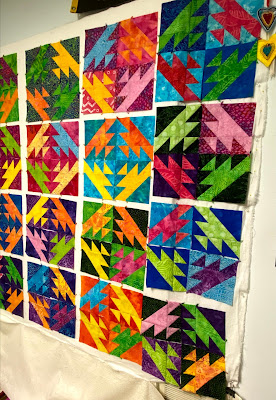 With some sashing - probably finishing at 2" - and a border all the way around I could have a nice lap quilt about 60" square. I haven't a clue what that border and sashing might be at this point. It's been fun to make the 6" blocks (most of the time; I have to be careful about how those half-square triangles get placed!). Who knows, maybe I'll just keep making more. 😉