From the end of October 2019 through to the end of October 2020 I made a "flight" of flying geese every week to create my second version of a diary quilt. You can see the flimsy of my first one here.  (Apparently I still have not taken a picture of the finished product.) Most weeks I chose two prints that somehow related to the experiences of that week and sewed the flying geese units in a string. Once in a while the geese were scrappy rather than consistent. When I sewed up what I thought would be the final flight of geese I turned my attention to other projects and pretty much forgot about it until recently. I have decided the time has come to bring the top to completion.

The first step was to lay out the geese again to try to figure out how I wanted to arrange them in the quilt. 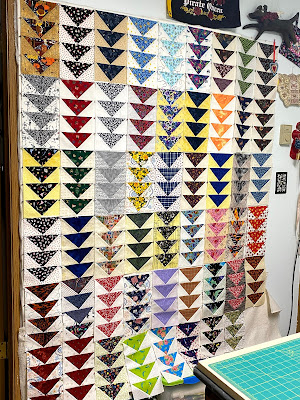 It's a good thing I kept track of what was significant each week. 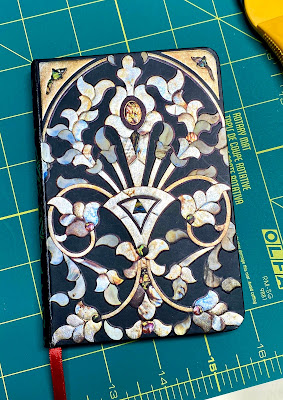 A couple of blocks got misplaced during the auditioning process. 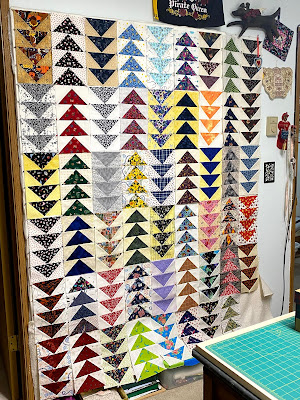 And then I sewed half the columns opposite to the way I intended them to be. 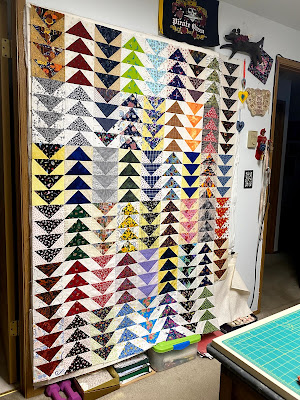 The idea is to start at the top left and follow the geese downward. At the bottom of the column you "turn the corner" and follow the geese back up to the top. You will notice there's a gap at the bottom of the rightmost column. Just room enough for another four geese. I've already made two out of scraps from the quilt I was working on in the first week of November 2020. I'd like to use one or two of the remaining spots as a label. First I have to figure out how to word said label so I know how much room it might require. A comprehensive listing would be ideal of course, but I'm not going there, even using the computer and printer. In the end it will probably be short and sweet. A reference to the little guidebook would be helpful but I don't quite know how I would accomplish that either. I've thought of a pocket into which a paper legend could be inserted. Not entirely sold on that idea though. Suggestions are welcome. I'd like to get this off the design wall as soon as possible as there's yet another baby quilt to be made!