I'm getting caught up!

The prompt for the fifth tag in Anne Brooke's #52tagshannemade project was "kisses." Anne made a large X on her tag and included some cross stitches, I pretty much followed her lead. 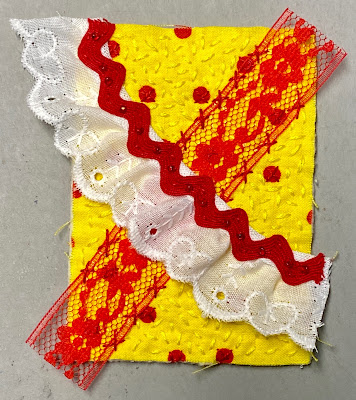 I also seed stitched the background. I put cross stitches on the red dots though. In the end I wasn't as happy with this tag as I'd hoped. I made a second version on my winter scroll. 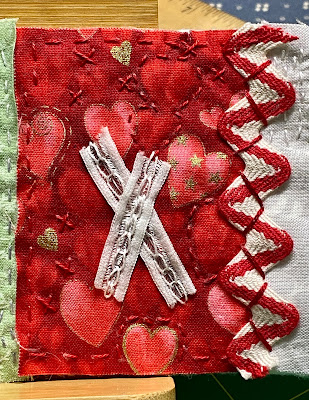 Fewer stitches overall but I like the look of it better.
Tag six was to feature "a bevy of buttons." Once again I ended up making two versions. I wanted to play with various ways to secure buttons to a foundation but I also wanted to showcase some special buttons.  The special buttons went on the ATC version of this tag. 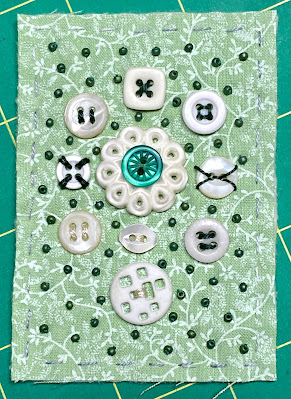 These are all vintage buttons made from a variety of materials. After the fact I wished I hadn't used the green seed beads in the background. They tend to steal attention away from the buttons. This overall project is as much about learning and gaining experience as anything else so it's all good.
On my scroll the focus was on finding different ways to attach the buttons. 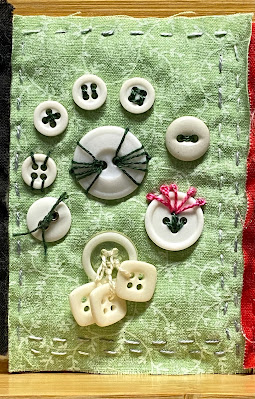 I really like the square ones dangling from the round button at the bottom. Just above, on the right, I was trying to make a flower. I'd seen others do something similar but they had better results. I haven't quite figured out why that was. Could be I needed bigger holes and/or finer thread to get what I was aiming for. At least I have this one for future reference!
This morning I completed my ninth tag, putting me ahead of the game for the first time. Hopefully I'll get you all caught up in a few more posts. 😁
Posted by Magpie Sue at 10:12 PM