Remember that neutral print scroll I showed you recently? 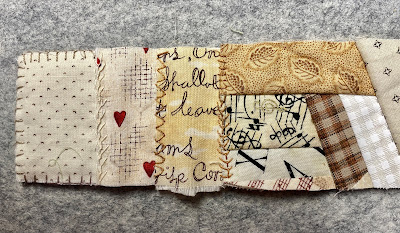 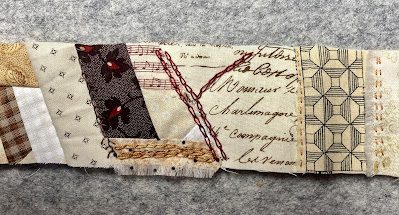 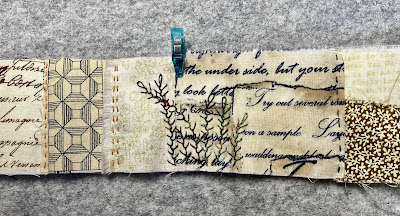 I sort of got stuck after a while, as you do, and started another scroll. That one is nearly complete - but I'm not going to show it to you yet. One thing at a time! The happy news is that I've picked this one up and started working on it again.

First, I used the technique I just learned for making hexagons out of folded circles to make a few hexies that may or may not go on this scroll. I've done some additional stitching too, only some of which is very visible. 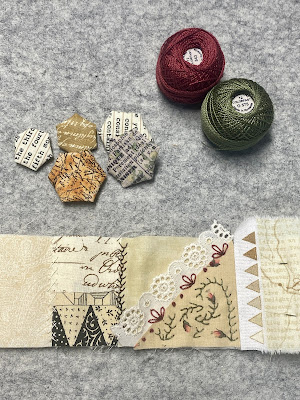 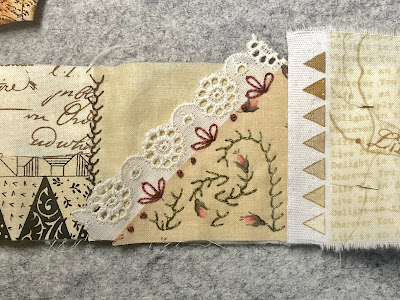 Those triangles are part of the selvedge edge of what may be the last section of this scroll. It hasn't been stitched down yet. That will either be the last piece of this scroll or I will have to add to the batting strip I'm using as a foundation for my stitching.

On another front, with the return of some sunshine to our part of the world I'm finding myself thinking about making quilts again. I haven't done anything more than just think about it yet but it's a step in the right direction which makes me feel better overall. James has made a quilt though. 😁 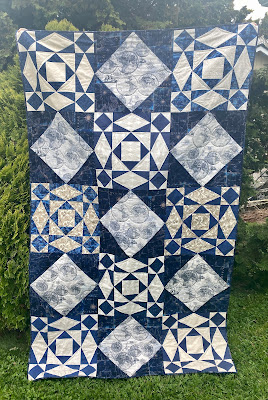 He'd come across a couple of map prints he really liked last year but couldn't figure out what to do with them until he decided he needed a new quilt for his bed. Then he looked for a block/quilt pattern he liked and settled on this Storm at Sea design. It's only the second quilt he's made that was primarily pieced. Of course he did his own quilting (which doesn't show up unfortunately but is pretty basic). He used a cotton sheet for the back. The binding was machine applied but sewn down by hand, by him. This came together over the space of about a week once he'd decided what he was going to do. There were some mis-cuts along the way but it sounds like the process went as smoothly as one could expect. You would be right in assuming I'm one proud mama. 😊