I actually got caught up on my ATC's for the #52tagshannemade project this week, week ten. But let me bring you a little further up to date by showing you what I made for weeks seven and eight.

The prompt for week seven was hexagons made by folding circles of fabric instead of the English Paper Piecing method. If I ever need to make hexies, this is the way I'm going to do it in future! There are at least two tutorials on YouTube demonstrating the method so I'm not going to try to show you how it's done here. I first saw Lauretta make them here. Then Anne showed how to do it when she released the video prompt for that week's tag. This is what I did with the hexies I made: 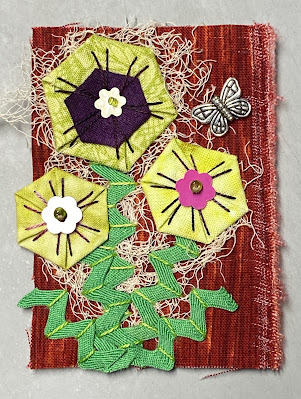 That's a bit of cheesecloth under the flowers, and rickrack for the stems/leaves. I only secured my hexie centers with the stitches required to sew on the sequins and beads. Might have been smarter to have stitched the folds down in the center first, then decorated them. 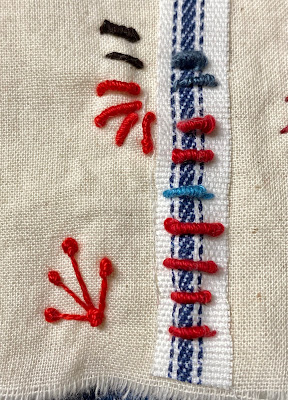 Still, it wasn't my idea of fun. And by the time I felt I had conquered bullion stitches my hands hurt. I opted to make straight stitches on my ATC where I would have put the bullions. Then I made up for it by putting a few Colonial knots in the background. 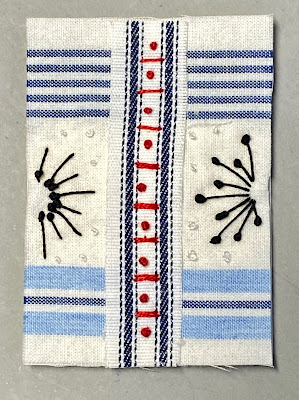 There's plenty of room to have done more on that tag but I chose to leave it the way it is.

There hasn't been much else going on here in The Magpie's Nest lately. I did manage to get two of my rose bushes pruned. There's one more waiting for its' spring haircut. Today is the best I've felt since I was outside the last time; I'm a bit reluctant to go back outdoors again. I'm wondering what the daffodil fields are looking like now though. It's about time for them to be in bloom. 😊