When the #52tags project began I wasn't sure I wanted to participate fully. I made my first "tags" on my Winter Scroll, up until about the sixth tag. After that I started making ATC versions of the prompts.

The prompt for the third tag was scrappy. Anne had been given a bunch of narrow strips that she folded in half lengthwise and then stitched down onto her foundation along the fold line, nestling each new strip right up against the previous one. That resulted in a lovely fluffy texture but also created more dimension than I wanted on my scroll or on my ATC. So on my scroll I just dug out tiny fabric scraps (of which I have plenty!) and stitched them to the foundation with scraps of leftover threads. 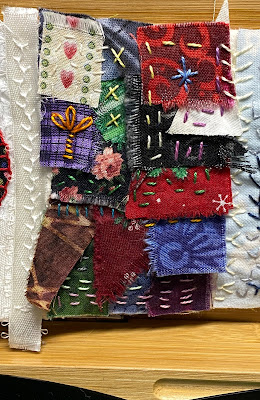 I actually like it better than my ATC version. I used essentially the same technique the second time around but my stitching is all hidden. At the time I wanted the scraps to be loose flaps more than quilted in place. 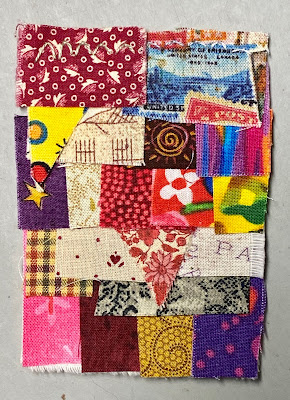 The prompt for the fourth tag was fly stitch. Anne plans to make one stitch the focus of one tag each month. Here's what I did with the fly stitch on my scroll: 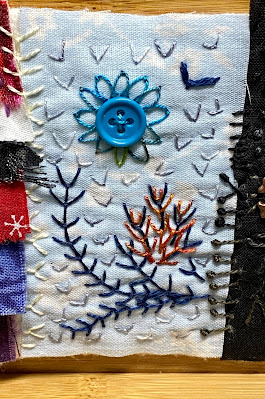 And this is the ATC version: 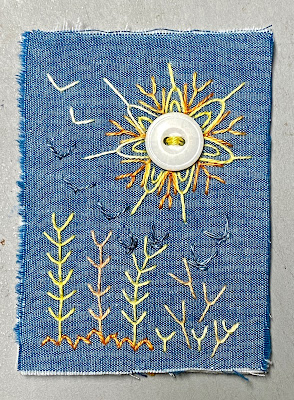 This time I followed Anne's lead a bit more closely around the button.
The prompts appear on YouTube on Fridays. I was caught up until this morning. Now I'm two tags behind again - I still have to make last week's tag featuring French knots, pistil stitch, and bullion stitches. I'm not worried about the French knots or pistil stitches, but I'm not looking forward to the bullion stitches. I've never done them before but they have a bad rep. The newest prompt is to use bits and pieces (of fabric and lace) and something you've received as a gift or found. That will be fun!
Posted by Magpie Sue at 6:09 PM