Now It's Our Turn

Our state is now officially under a stay-at-home order. Up until yesterday it was merely a strong suggestion. I can understand it's hard on folks to stay home, especially around here in spring when trees and flowers are beginning to bloom. I generally try to take a tour of the fields just west of us to monitor the progress of the daffodils, then tulips, and finally irises. Always from the safety of my vehicle. I rarely get out of it because I never know what toxic fumes might be in the air. I've also run out of cut flowers in my studio. Since my personal self isolation began several years ago my husband has learned to buy flowers for me when he gets groceries. Flowers are probably not considered essential by most folks but they are for me. I've had a couple of vases of early variety daffodils come and go already. I won't have anything blooming in the yard to cut and bring in for a couple of months in all likelihood. I have no notion of what he might find when he goes for groceries the next time.

Our local economy gets a significant boost in April with the annual Tulip Festival. The fields are currently closed to the public. There are also a couple of display gardens in conjunction with the festival. It remains to be seen whether they will be able to open this year. I was delighted to learn that one of the growers has opened up a roadside stand where one can buy cut or potted tulips among other things. The young ladies tending the stand wore protective gloves and the way things are set up it's hard to get too close for safety. I'm always masked when I go out in public too. So now I have some cheerful yellow tulips to brighten my living/working space. 😀 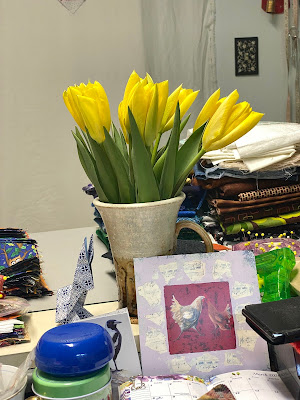 I noticed other businesses in town also trying to make the best of things. We have an independent art and craft store that has recently installed a pottery painting area and a kiln (I assume there's a kiln; I haven't been in to see in person). They have a sign on the sidewalk in front of the store advertising take-away pottery and art kits! On a less happy note, this is what our neighborhood playground now looks like: 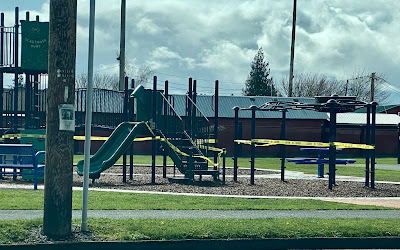 All wrapped up in caution tape. I'm betting there's a sign somewhere prohibiting use of the facilities. I didn't get out of my car to look.

A couple of other, more pleasant, sights from the surrounding countryside: 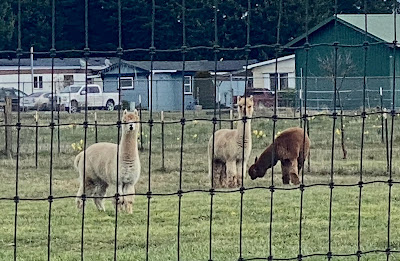 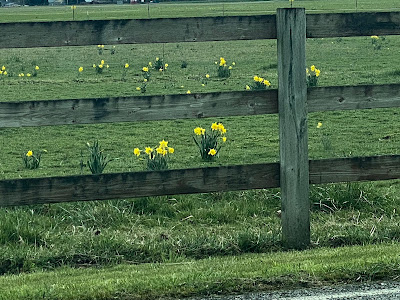 The field adjacent to the alpacas had obviously been used at some point in time to grow daffodils. You can see them in the previous photo behind the alpacas. 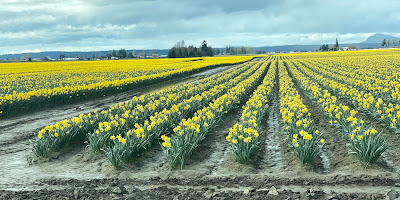 There didn't seem to be as many fields of daff's as in the past. I think the bulb industry has taken a hit in recent years. Or for some reason we have fewer growers in our area now. They were family-owned farms. Small businesses like that have suffered all across the country, and not just because of the current medical crisis. 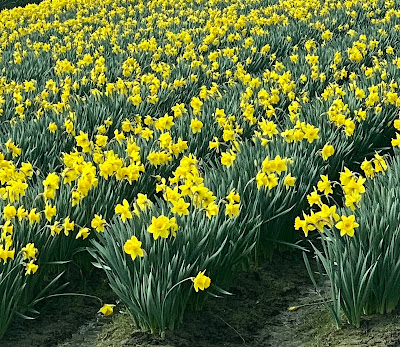 Daffodils were my mother's favorite flower. I've come to appreciate them more every year. I'm okay with daffodil-colored tulips for now though. 😊