Since I've been unable to attend my local quilt guild meetings for over a decade now I've sort of lost touch with some of the goings-on in the universal quilt community. I see blog posts about National Sewing Day or Craft Month or whatever but I'm never quite prepared to participate or comment here as they occur. As my mother used to say, always a day late and a dollar short. In any event, 21 March was National Quilting Day.

But! One day this past week I was inspired to look through the single Trip Around the World blocks I've been making out of my 3" scrap bin. In addition to this block I showed in our last Scrap Happy Day post... 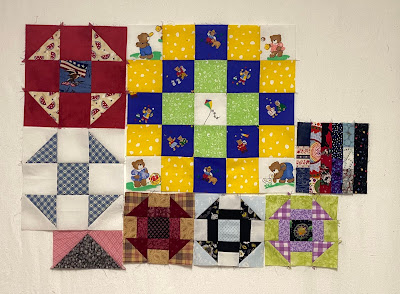 I found three others that sort of worked with that one. 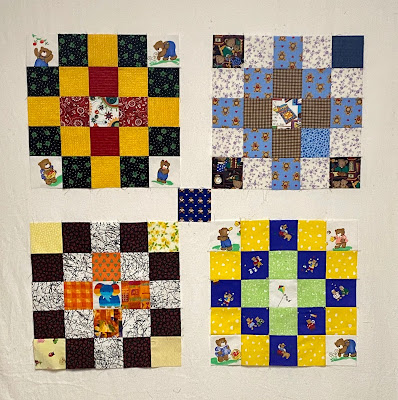 Three of the four blocks feature teddy bears in one or more patches. The fourth block carries on with the yellow found in two other blocks. And who doesn't love a baby elephant?! I found another teddy bear patch in the scrap bin to use for a cornerstone in sashing between the blocks. And then I found scrap strips that worked for sashing - at least to my eyes. It might be too busy for some. 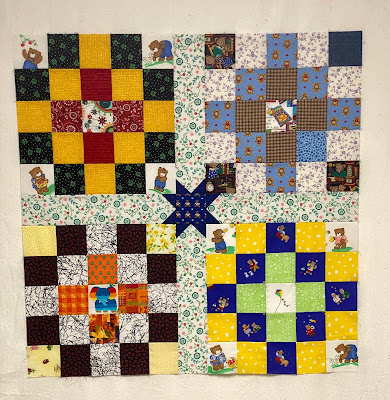 To top is all off, I found the leftovers of another baby quilt to use for the final, outer border. 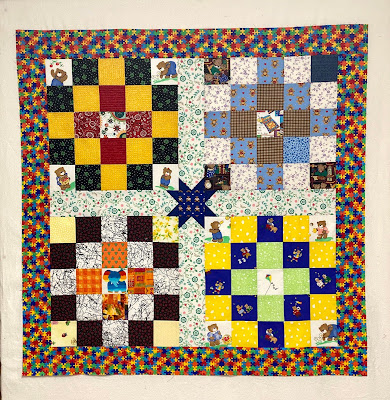 Used that all up. 😃This would totally qualify for a Scrap Happy Day project but I didn't want to wait that long to share it with you. And besides that, it's already been quilted and is ready to be bound! 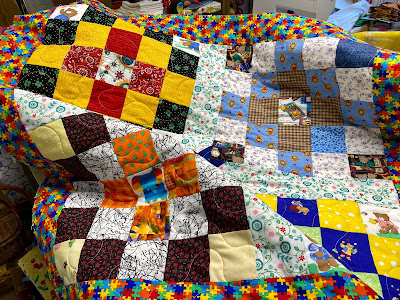 James used a variegated thread and a large meander. It probably took him longer to mount it on the long arm than it did to do the quilting. He said the quilting only took about ten minutes. I have a happy red binding all set to finish this off.

This little quilt (about 39" square) will be my first quilt for this year's Hands2Help quilt drive. It will go to the Little Lambs Foundation in Utah. From start to finish this was such a quick project, only a matter of a couple of days. (Well, disregarding the binding process of course.) Might have to make another one next week!