From the Seas to the Heavens


The title of this post could easily refer to the passing of the 41st President of the United States but that was not my intention. I do mourn his passing as we have lost one of those thousand points of light he once encouraged us to be. I cannot help but contrast George H. W. Bush's life and service with that of the man currently residing in (and disgracing, in my opinion) the White House. Talk about polar opposites! But enough of that.

Let Your Dreams Set Sail is now in the queue for quilting. 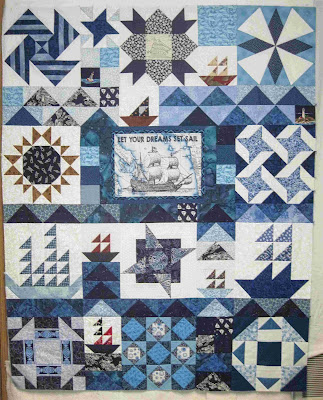 To keep from falling into that limbo that so often occurs for me between projects I pulled out some of the postage stamp stars I'd made in my Rainbow Scrap Challenge days, I also got out some novelty prints I thought I would try to put to good use. I put the stars on the design wall and started fussy cutting. 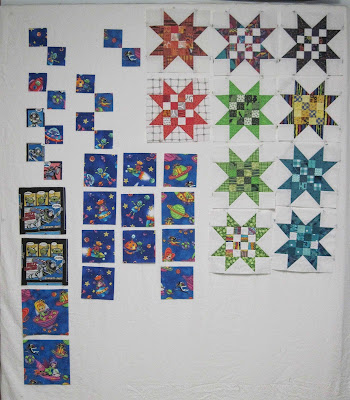 There are some 2.5" squares, a column of 6.5" squares, and then the 4.5" patches that go in the middle of 8" sawtooth stars. The prints I chose to cut up featured Buzz Lightyear, some whimsical aliens on rocket ships, and lady astronauts reminiscent of the Jetsons cartoon.

I wanted to make as gender neutral a quilt as possible so I avoided cutting out the lady astronauts as much as possible. Mostly they were too big anyway.

After a couple of days of pondering and auditioning companion or background prints I finally ditched the postage stamp stars altogether. There was almost a yard of yet another whimsical celestial print in my stash. I cut that up for sashing strips and more focal patches. I also sewed the 2.5" patches into 4Patch units. My plan now is to make a whole new set of stars specifically for this quilt, which will be another that finishes about 48" x 60." This is how I plan to lay out the blocks: 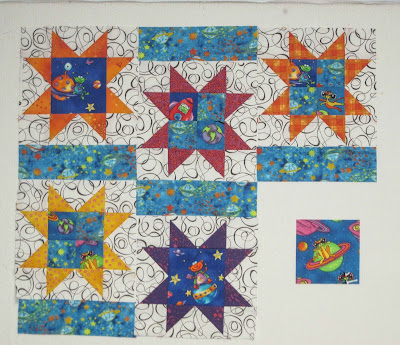 This will give me something easy and fun to do inbetween Christmas preparations. I really must get some decorations out. You'd never know it was the holiday season in our house!