I'm posting this a little early as Scrap Happy Day and our next Stitch Along check-in fall on the same day this month (the 15th). It remains to be seen what I'll have to show for the SAL. I've come down with a little spring cold and that has slowed my progress somewhat. We were hoping it was just allergies the husband and son were suffering from. Turns out it was something contagious. Fortunately it hasn't been as bad as some other colds I've had in the past (she says while knocking on the wooden bookshelf nearby 😉).

Faithful followers will know that I routinely work with scraps. The project I designated for Scrap Happy Day last month was another Disappearing 9 Patch, this time featuring scrappy Broken Dishes blocks in place of the 5" focal patches I've used in other versions of this design. (One of which I don't think you've seen yet!) I'd decided on a layout for the blocks but hadn't determined specific placements. I got the blocks out again a few days ago and started playing with them on the design wall. 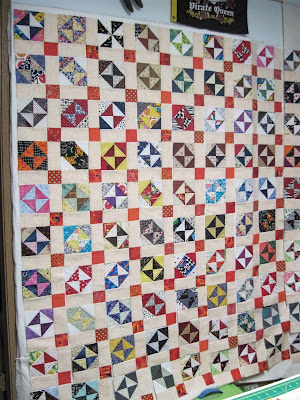 When I had an arrangement I was happy with I sewed the blocks into rows. That was as far as I could go that day. The next morning I noticed a pair of very similar blocks too close together for my peace of mind. Rather than trying to move one or the other of the blocks I tried moving whole rows. That worked for the most part. In the end I did have to disassemble half a row, move the blocks around within it, and then put it back together. But the end result was worth it. 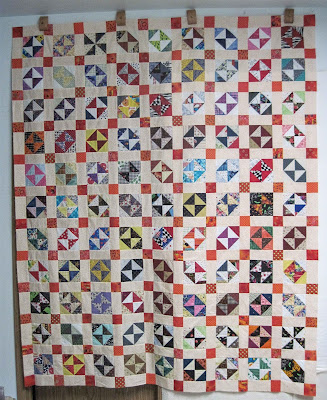 I could have fussed with it longer (like, forever) to try for better color and value distribution across the quilt top but after a while you just have to say "Enough!" I also made the sashing to go across the top and down the left side to complete the sashing and cornerstone pattern. Now the question is whether or not to add a border. This measures about 61" x 74" at the moment. I could live with that size, it just looks unfinished to me. I don't know whether binding alone will do the trick. The thing is, I found this absolutely delightful Halloween print that I thought would be fun to use in this quilt somehow: 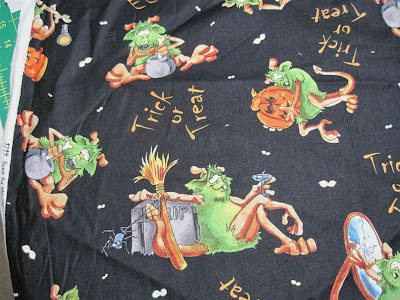 Turns out the print scale is a bit too large to show effectively in a border in my opinion. I don't want a ginormous quilt just to accommodate this print. I originally bought only a yard when I saw it in a local store. I went back to get what was left on the bolt a few days later, wanting to have as much of it as possible to expand my options. Now that I have the body of the top compete and have measured the gremlins I think it's going to have to become the quilt back. So what, if anything, do I do to the front?

Scrap Happy Day is the creation of Kate at Tall Tales From Chiconia and Gun in Sweden. You might pop over to see what they come up with for either Scrap Happy Day or the Stitch Along as they are both involved in both efforts. 😊
Posted by Magpie Sue at 11:53 AM