Are we really one week into the New Year already???!! Time sure got away from me since my SAL post! Partly that's due to the down time necessary to recover from chemical reactions. Needlework has taken place but I want to save that reveal for the next SAL. Like most everyone else I've been considering goals and options for my studio time this year. Nothing big has come of it yet. For now I'm just happy to have the studio cleaned up enough from Christmas to cut and sew in relative comfort. That's not to say that it's any better organized than it was before the holidays. 😉

I found the ideal project to ease back into quilt making activities in the new block drive for Covered in Love. Kat is asking for scrappy 10.5" string blocks, pieced on a fabric foundation. One thing that has been niggling at me in the back of my brain are the truly old prints still in my stash. I pulled one out today that is labeled from 1992 for crying out loud! These are not scraps like I would use for the Rainbow Scrap Challenge but larger pieces, almost yardage. (I rarely bought anything bigger than half a yard back in my early quilting career.) I decided to focus on those prints that have been languishing for years, figuring that I wouldn't miss them since I hadn't found a way to use them in all the time I've kept them. They became the fodder for my foundation squares. Here's one example: 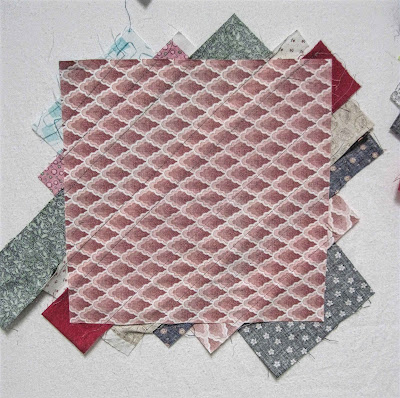 I pieced the strips to the wrong side of the foundation fabric to diminish any shadowing through of the colors from the foundation. The first four blocks were made with precision cut strips. I typically cut 1.5," 2," 2.5," and 3" strips when I'm demolishing a piece of fabric. I cut other shapes too but right now we're just talking about strips. 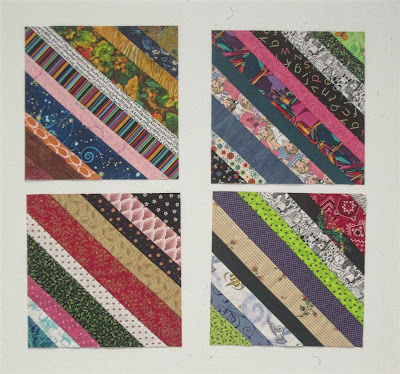 While the strips were precision cut, I placed the various widths randomly on the foundations. After these four I turned to the box where I toss my random strips. These are the off-cuts of the backs of quilts or the trimmings at the end of a cutting session. Some in that box could be precision cut or even cut into squares or triangles but I didn't want to take the time. A lot of them are one width at one end  and then taper down to something less than 1.5" at the other end. I made two blocks with strips from that box... 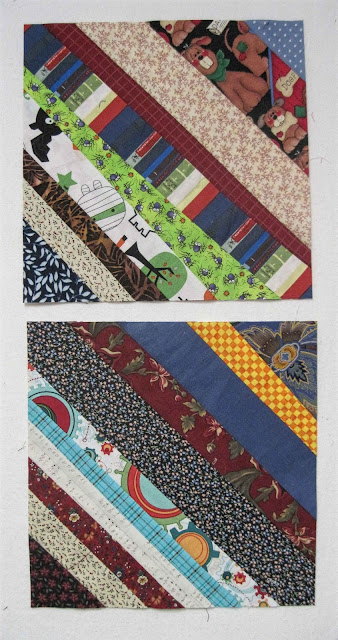 And then went on to make four more! 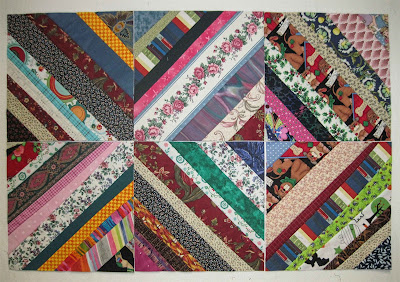 I could keep on making these without any fear of running out of strips. There's no way I'm going to even try to empty the box however. I'll probably make a few more blocks and maybe by then I'll be ready to tackle one of the UFO's or block collections that are waiting to be turned into quilts or, who knows, even a brand new project!