I wasn't sure I would have anything to share for this first Scrap Happy Day of the new year. I've already shown you the first of the string blocks I made for the current block drive for Covered in Love. 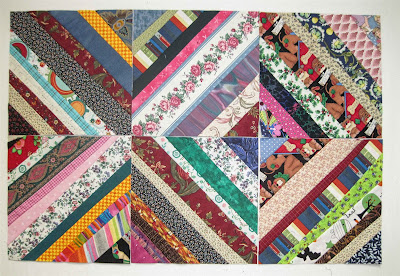 I made another set of four since then: 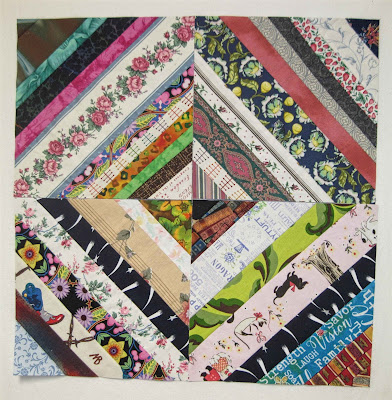 Do you think there's a noticeable difference in the number of strips and strings I have laying about? Yeah, I didn't think so. 😉 Regular readers know better than that. It seems no matter how many scraps you use, there are still more than you began with somehow.

To make matters worse, when I pruned these blocks to the required size (10.5") there were some trimmings big enough to cut into tiny triangles. I have a ruler called the Scrap Saver from That Patchwork Place that makes it easier to cut half-square triangles from odd pieces of fabric. So of course I had to cut as many 1⅞" triangles as I could from the leftovers. I'm compulsive that way. It would be so much easier to just toss them in the trash but I couldn't do it. I ended up with 101 half-square triangles from the first six string blocks and another 31 from the more recent batch of four blocks. 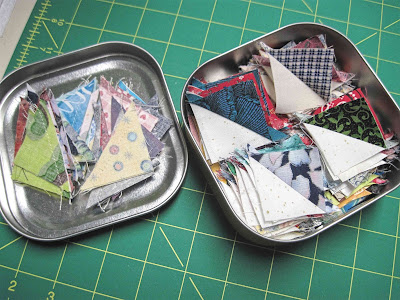 As you can see, I haven't pressed the most recent triangles yet. 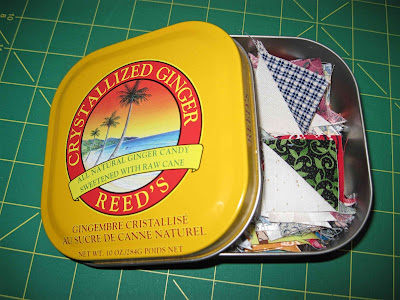 I was happy to find this 4½"  tin in which to store the pressed units until I figure out what to do with them. There are several options swirling about in my head. Whatever they end up in will be a truly scrappy product! To see more scrap projects in the works hop on over to Tall Tales from Chiconia. Kate co-hosts a gathering of scrappy endeavors with Gun every month on the 15th. She has the complete list of participants on her blog. Be careful - you might get inspired to do something with your own scraps!