Not much actual sewing is taking place in The Magpie's Nest these days, partly due to the holiday season and partly due to the toxic exposures that come with the holiday season. I didn't think I would have anything for Scrap Happy Day this time around. Then one day this week I wanted to do some hand embroidery. Specifically, I wanted a place to practice feather stitching. I rummaged around and found some crazy piecing I'd done years ago, with the scraps from a doll quilt I'd made for my daughter. (Which gives you an idea how long ago this was pieced: my daughter has four daughters of her own now!) The doll quilt was something like 18" x 20."  This piece would finish at about 8" x 10." 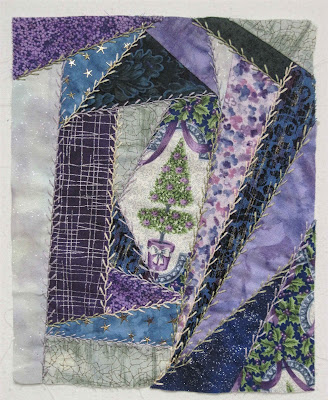 I'm using - of course- some of Nancy's hand dyed floss. 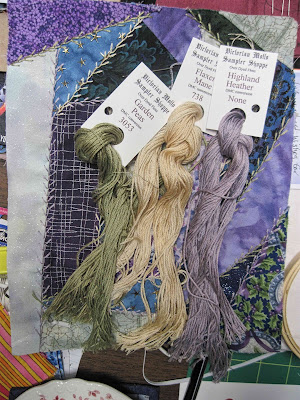 By the way, there's still time for you to hop over and sign up for her advent give-aways. Two prizes have already been awarded but you've got ten more chances! Well... nine by the time you read this probably. She will ship internationally so don't think you can't enter if you're on another continent.

I discovered that I'm more comfortable working the feather stitch with the work upside down rather than right side up. Although I haven't quite wrapped my head around working the stitch from the bottom up as it were. If that's even possible! 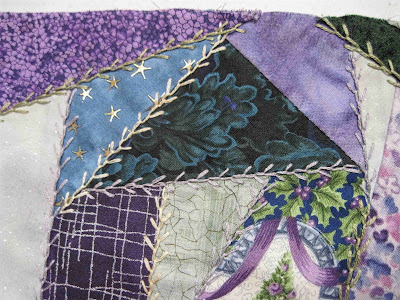 I have no idea what else may happen to this bit of crazy patchwork. There are a couple of short seams to cover yet. After that I may create some false seam lines just to break up the longer patches a bit. I have no idea what I'll do with this once I've finished embellishing it either. Might make a fun journal cover...

Kate  over at Tall Tales from Chiconia has a whole list of folks who've been playing with their scraps if you need some inspiration or just some eye candy. 😉