Stitch Along in September

I almost missed it! After several mostly good days I fell victim to a series of low level toxins. Fortunately I have now recovered and can share with you the needlework I've been doing.

I'll begin by stating that I have finished the secret project but have not yet bestowed it on the intended recipient. Hopefully you'll get to see it in my next SAL post on 8 October. In the meantime I have begun yet another needlepoint case. This one is the size of a cosmetic bag, about 4.5" x 7." 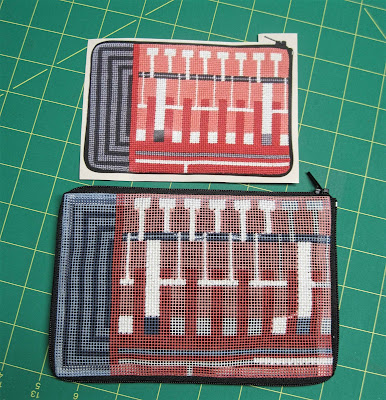 I've also done a bit more embroidery on the set of pillowcases I started in August.


The next step with these is to decide what colors to use for the flowers. Well, once I've completed the scroll work. 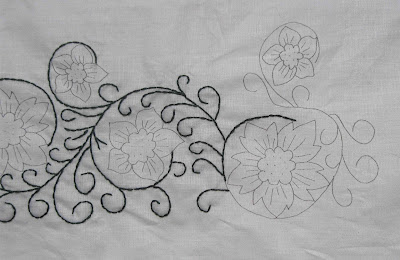 I used Nancy's hand dyed floss for the scroll work. It's a warm dark green from her Spooky Hollow II collection. The last batch of floss in the limited edition floss club I joined were mostly pale shades. I prefer the more vibrant tones. I'm very tempted to purchase the current collection of autumn colors (like I need more floss!). But there are probably skeins I could use already in my possession.

I've also made progress on the next caravan I'm embroidering for The Sketchbook Project. I don't know how many there will be in the end. This is the fourth in my series. 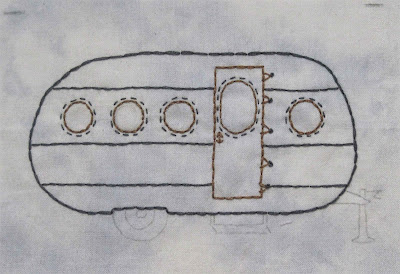 I'm doing it with an eye to making a steampunk trailer. So mostly metallic colors: bronze, pewter, etc. - but not metallic thread. I don't want the shine or sparkle that would give. 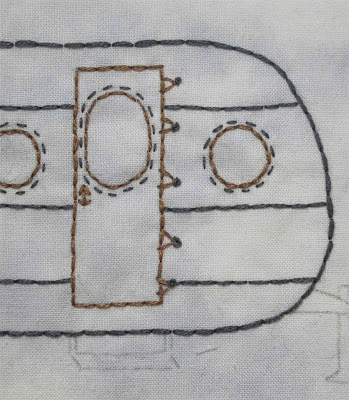 I'm not entirely happy with the widow in the door but I doubt I'll do anything about it. I thought I'd use colonial or French knots to indicate bolts around the porthole windows; they turned out to be too bulky. The simple running stitch did the job very well as it turned out. This has been set aside for a while; I need to get back to it so I don't lag too far behind.

There's quite a group of us in this stitch along now. All sorts of needlework is being done among us. I invite you to take the tour by clicking on the names below. We have some new members this time around and we welcome them. If you'd like to join us leave a comment on Avis's blog. :- )