Last year I requested 12" (finished) Patience Corner blocks from my local guild members for a quilt for our women's shelter. I meant to wait a full year to set the blocks but I think I've received all that will be coming in. I had also thought to have 49 blocks to set 7 x 7 for an 84" quilt. There were 40 blocks when I counted them up the other day. A couple weren't the right size due to cutting errors and one wasn't made in prints that would blend with the rest of the group. Of the remaining blocks I fully expect one or two to be shy of the full 12.5" for easy piecing and I'll have a couple left over. It would be simple to make more blocks but I don't want to. Instead I'm going to set 36 blocks 6 x 6 and then add 6" of border all the way around. I don't have a clue yet what that border will be; I'll worry about that later.

Because it was so successful in the quilt I made for my granddaughter (which was inspired by the request for the blocks in blue)... 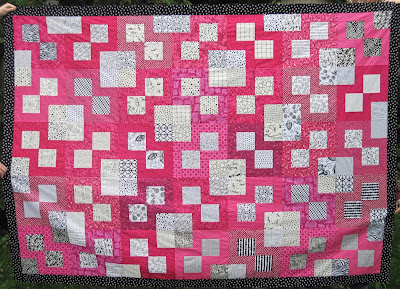 I began by laying out the blocks the same arrangement. There were quite a few blocks with yellow squares within the blue framework. So many, in fact, I was able to make a giant X to begin designing around! 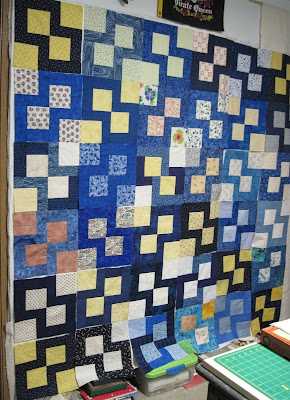 This may not be the picture of the final block placements but you get the idea. Once I had them arranged to my satisfaction I couldn't help but wonder how they would look set straight, all facing the same direction. 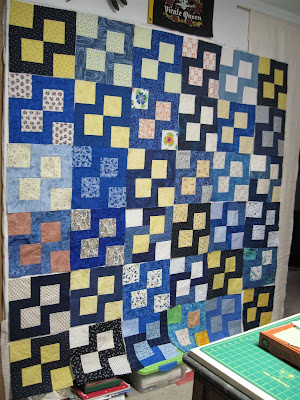 Darn if I don't like it better this way! I was afraid that once I'd turned the blocks I'd want to rearrange them again according to the values of the blues. I did change a couple of blocks around but more for a better placement of the focal patches than for the balance of blues. Another perk of this arrangement is that seams that ought to line up but don't won't be nearly as obvious. All I have to do now is sew them together. :- )