Back to the Beginning?

Having finished, or nearly finished, so many quilts of late it would appear my creative self needs a change of pace. I currently have little interest in piecing or building quilt tops out of my Parts Department. It would be scary if it weren't for the fact that I have developed an avid desire to work with a hand needle and colorful floss instead.

I began my needlework career as many others have, as a child doing simple embroidery. By the time I was twenty I had gone through latch hook rug making and settled into needlepoint in a big way. I dabbled in blackwork and cross stitch but never did much more embroidery. It would appear it's time to circle back around to the early days of my needlework career.

If you've been visiting regularly over the last several years you'll know I enjoy bead embroidery, inspired by workshops with and books by Robin Atkins. I followed Sharon B. over on her blog Pintangle for a couple of years too. I've always retained an interest in the type of embroidery done on crazy quilts although I never fell deeply into that particular pool. Sharon's long band sampler really piqued my interest however, and has stayed with me. Something of that ilk has been on my nebulous needlework bucket list. Now I find myself lusting after Nancy's hand dyed floss over at the Victorian Motto Sampler Shoppe. I finished up the litter of Cocker spaniel puppies I've been stitching on a dish towel (but I'm waiting for the next stitch along post to share that). What to do next?

Almost without thinking - the best way for me to begin some projects  - I got out embroidery transfer patterns I've acquired from Sublime Stitching, selected a couple of images, and ironed them onto a strip of bleached muslin. I purposefully cut the strip 8.5" wide and from selvage to selvage. I've folded it in half to get a piece 8.5" wide by about 22" long. 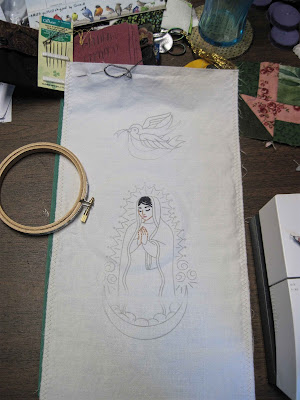 I wanted a place where I could stitch without having to think about what it's going to be turned into later, where I could play with color combinations more freely and practice my embroidery skills and stitches. Something that didn't feel too precious,. That was a problem I ran into when I tried to do this with a piece of linen several years ago. There's no way this will become the lengthy sampler Sharon has created (nowhere near!) but hopefully it will be a place for me to play. That element of play, of freedom, is something I need to cultivate. I grew up in the era when the goal was to make handmade things look machine made, "perfect." And being a hyper-responsible type I've had a very hard time shaking that upbringing. Even now I'm having trouble deciding what color to make this Virgin's robes. Lime green and fuchsia? Or the more traditional red and blue? I need to just delve into my box(es) of embroidery floss and see what turns up. But oh, how I would like to try out Nancy's floss on this! 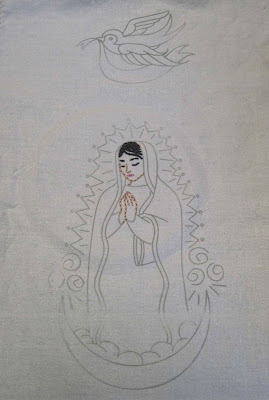