Today marks the end of the first month of our Foot Square Freestyle block swap. Esther has received some of her blocks and the rest are on the way. I had hoped to put up pictures of all the blocks made during this swap on my dedicated F2F page but I haven't quite managed that yet. I've been incapacitated too often to have spent much time on the computer. I can, however, send you over to Kate's blog where you can see all the blocks that she has pictures of so far. And I can show you what I made. :- )

Esther requested blocks made with white, mustard, jade-ite or minty green, and coral. I just happened to have the perfect green in my stash! According to my book of block patterns this one is known as Ladies Wreath. 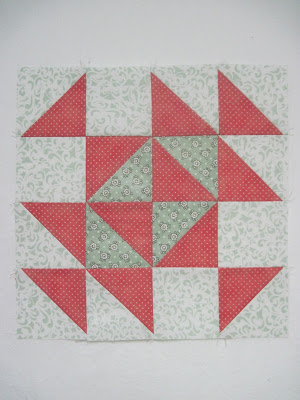 I made a Colorado block too, even though I have no association with the state of Colorado. It puts me in mind of a flower. 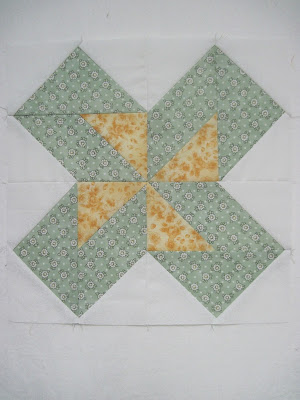 Lastly I made an Ohio Star since that seems to be my signature block this year. 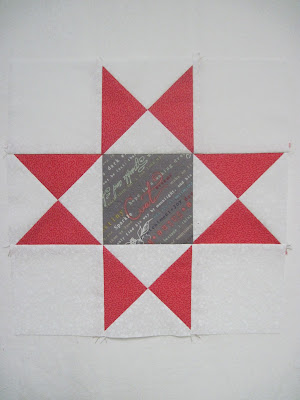 There are all sorts of uplifting words and phrases in that gray print in the center of the star. I fussy cut the center patch to get the word 'Create' in coral tones for this star for Esther.

There was a good deal of paper piecing going on in other parts of the world for this swap. I heartily encourage you to pop over to Kate's blog to see what else was made during the month of June. Next up is Annett, who doesn't live all that far from Esther as it turns out. She has asked for blocks that feature white, green, turquoise, and orange. I've already got my blocks for her done but I wont' show them until Annett has them in her hot little hands. ;- )
Posted by Magpie Sue at 10:28 AM