One of the reasons I signed on to the String Thing Along was because of this: 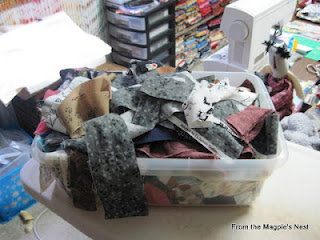 That's my box of rough cut strips and strings. Plus there's a growing accumulation of precision cut strips in my studio closet. I've always been intrigued by foundation pieced string quilts but there was always a hesitation to start one. Finally Brenda issued a challenge on the String Thing blog to try to make an ugly string block. I can't resist that kind of challenge! I don't think I made an ugly block per se, but at least I made a block. 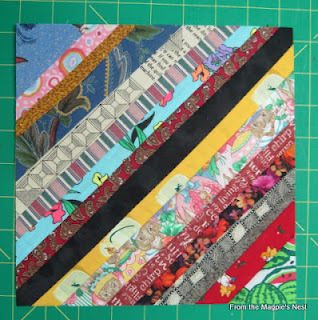 What I didn't know was that making that block would open the floodgates. I immediately cut more foundation squares, going through all the muslin in my stash. (This is what I was doing while you were patiently waiting to learn what had become of the Dr. Seuss quilt. This sort of thing is also why I'm reluctant to interrupt one project to start another!) In a matter of days I had this on my design wall: 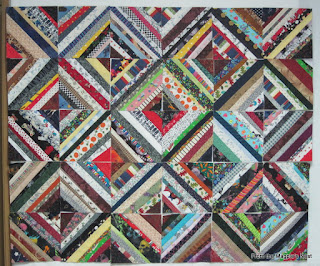 I believe the photo above was the result of just putting them up as they were finished. I ran out of muslin and started using another very pale printed cotton for my foundations. Eventually there was no room left on the design wall. Time to play with the blocks!

I tried out a zigzag setting: 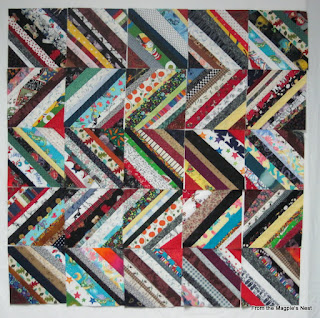 Then I tried them all going the same direction: 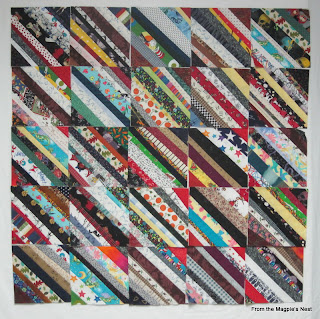 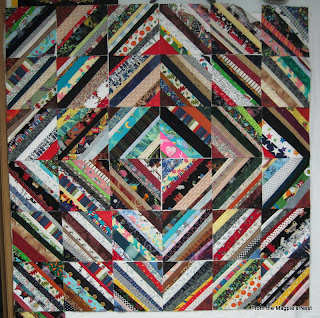 That's the one I liked best for this set of blocks. I'm in the process of tweaking block placements now. I believe this will be a quilt for our local Foster Care program. And after this one I think I want to try another version featuring a white or light strip down the center of each foundation. Or maybe one with red center strips. But I could just as easily make another one entirely scrappy!