Back to the Doctor

Well, it's been nearly a week since my last post. It was mostly a good, busy week but there were a couple of unexpected exposures that took me down. Something at the food co-op, normally a relatively safe place for me, turned out to be very toxic. And it was still there later in the week. Weird. Hopefully it will be gone by the time I have to go back.

Meanwhile, Sharon has reminded me that you're still waiting to see how the Dr. Seuss quilt turned out. Sorry about that! I got involved in a new project almost as soon as I completed the Seuss top and that absorbed all my attention.
So this is where the quilt for the library's summer reading program was when last you saw it: 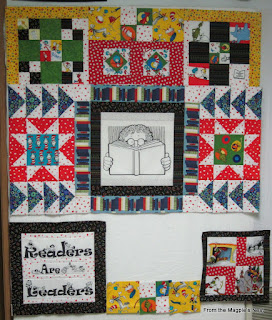 You'll have to look carefully to see the minor, but effective, change I made between that photo and the next one. 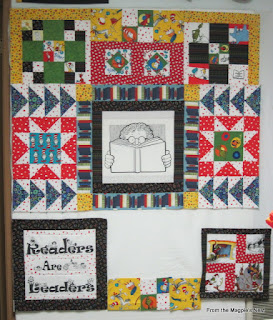 Did you spot it? I took out the white cornerstones that stopped the book borders around the reader and replaced them with the yellow print. I'd been looking for a way to get that yellow into the center of the quilt. All it took was these four little patches! 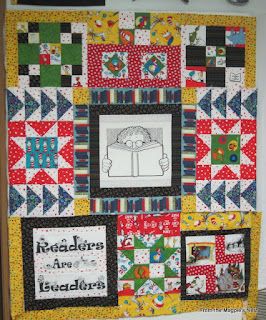 I knew I wanted some red below the reader panel to balance out the red in the other quadrants. A bit of "Cat in the Hat" print did the trick - just a whole cloth strip. I made one more star out of a four patch block I'd sewn up earlier, filled in with more of the scattered Dr. Seuss characters on yellow, and framed the bottom with the same dotted yellow I used a the top and in the middle. I thought I might add a final border to enclose the composition but in the end I decided against it. I am assured the quilt is big enough as it is, which is about 49" x 60." I have a rainbow stripe I plan to use for the binding and I think that will finish it off nicely. I haven't entirely decided what to do about the back. I feel like I still have plenty of time though. And I expect the quilting I do will be fairly straightforward and minimal. I really am more about the design, the piecing, than the quilting. ;- )
Posted by Magpie Sue at 4:08 PM