Quiltdivajulie offered a couple of suggestions last week when I got stuck on this Dr. Seuss quilt. One of them was to put the "Readers Are Leaders" block under the reading child block and then treat them as one large unit, a central medallion of sorts. That would have been easier to do, perhaps, if I hadn't already made the child reading bigger than "Readers Are Leaders."

I also tried out this arrangement, after I'd framed what had been the lower right corner block with the same black prints that are used around the bigger blocks. 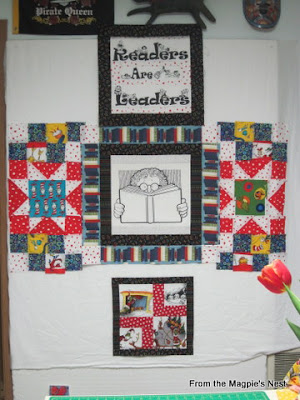 It just didn't feel right. But framing that smaller block up was helpful in one respect. It distributes the black more evenly across the surface of the quilt top.

The next thought I had, after putting the blocks back where I originally had them, was to take out the prospective 4-Patch checkerboards and replace them with the flying geese units that were going to be star points and background. 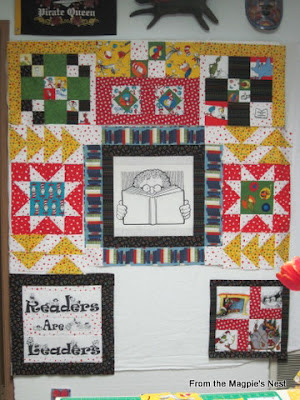 It was okay. Still a little busy, and a little... light, maybe?

What if I were to use the blue I bought for the 4-Patch blocks as flying geese instead? 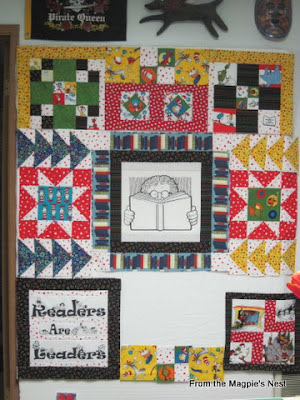 Oooo, now that I like! Thank goodness I still had enough of both of those prints to get the job done! 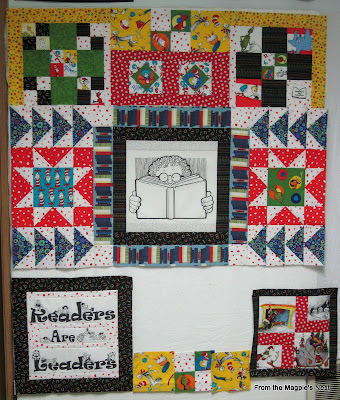 Now I just have to figure out how to resolve the lower portion of the quilt. I may have to go looking for more of the white with red dots; there's not much left! I'm thinking I'll want to bring in more of the strong red to balance the bottom out with the top and sides. We'll see.

It feels awfully good to be well enough to tackle a design challenge like this again. Over the weekend I considered setting myself up with some sort of embroidery project to do the next time I'm under the weather. Something where all I have to do is thread a needle and follow the lines. I was tempted to sew scraps together a couple of times in the last few days. Not sure what kept me from doing so. Maybe it was fear of being completely derailed from the Dr. Seuss quilt. I seem to do much better when I can focus on one project at a time. Who knows where scrap sewing would have led?! ;- )