I made such good progress on the Dr. Seuss quilt the other day that my mind was free to turn to other projects I have on the back burners. One of those is this year's Bead Journal Project.

Late last year I thought I knew what format I would use for this year's BJP. Then, at the beginning of the year a whole new concept came to me. There aren't many rules for the BJP (which is one of the reasons I like it so well) but one of the few is to pick a format - the size and shape of our piece each month - and stick to it. So it was important that I find something I could live with.

In the past I wanted each BJP piece to be a stand-alone piece of artwork. I have three year's worth of those now and storage becomes an issue. My plan for this year was to bead on six inch batik squares that I would then assemble into three or four little wall hangings. My intention was to go with a fantasy or fairy tale theme rather than trying to journal specific life events. Choosing a subject each month has been one of the biggest stumbling blocks in the past so I thought working from a theme would be helpful. It would appear to have had the opposite effect. All of a sudden it's April and I didn't have a single piece even started, much less finished, for this year's Bead Journal Project!

Then the other morning I woke up with an idea for a new format for my BJP. I'll still be beading on six inch fabric squares and assembling them into one or more little quilts but I've discarded the fantasy theme. The first thing I did was play around with sizes and set up three foundations for beading. I had a pretty clear idea what I would do for January and March. Unfortunately I didn't have appropriate beads in stock for March's piece. And something about my foundation for January kept me from starting in on it...

When I realized that I needed a calmer background for January everything fell into place. I had cut a 6.5" square from a text print Quiltdivajulie shared with me. Yesterday I swapped that out for the same fabric I'd used as the background in the swap quilt I made for her. 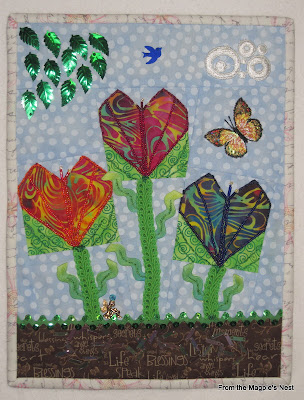 And what I ended up making was a sort of replica of the swap quilt: 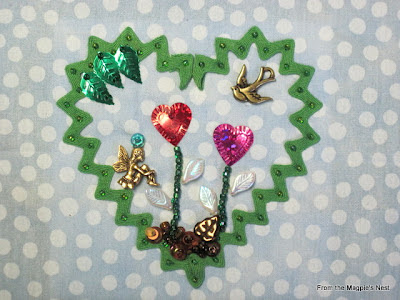 At the very bottom of the rick-rack heart I used some beads also from Julie. Hurray!

Here's a shot of my beading area just before I cleaned it up all the way. I use the ceramic paint palette as a bead palette. The glass bowl currently has the bead mix I worked from to fill in the bottom point of the heart. 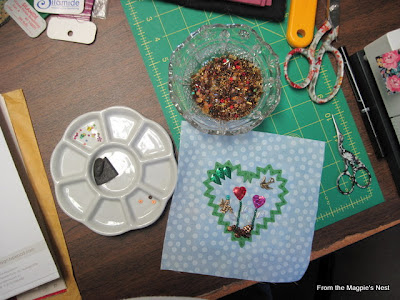 I rarely use the leather thimble you see in the middle of the ceramic palette; it just never got put all the way away the last time I did use it. You may be able to see that there's an accumulation of stray beads in one of the sections of the palette. Eventually they will go into a little baggie in my bead stash and become the ultimate bead soup!
Posted by Magpie Sue at 9:50 AM