The Disappearing 9 Patch pattern came to my attention again last week. I forget exactly what the first event was, but the second was a visit to Sharon over at Indigo Threads. She mentioned a D9P she has in process; between the two references I found myself inspired to make another one myself. I think this will be the third quilt I've made using this pattern. The first one was a preemie quilt, the next a baby quilt, and this one is intended as a sort of I Spy quilt for a child.

The first thing I did was to go through some old charm squares I had in my stash and pull out child-appropriate pieces. Then I started fussy cutting more images. I also cut up some smaller scale prints for the mid-point patches in the 9 Patch blocks. 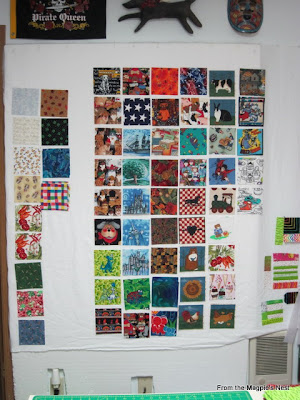 Slapping them up on my flannel design wall was a useful way to see what I had... until there got to be too many! 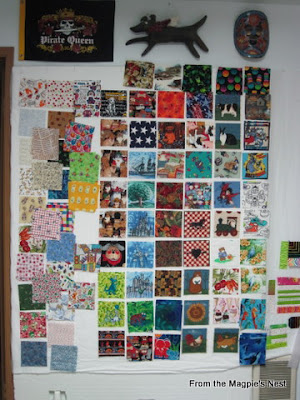 By my reckoning I needed 14 nine patch blocks (using 5" patches) to get a quilt close to 40" x 60" finished. My goal for each block was to have a big image in each of the four corners and small to medium prints in the other patches. Everything - or nearly everything - is a novelty print. 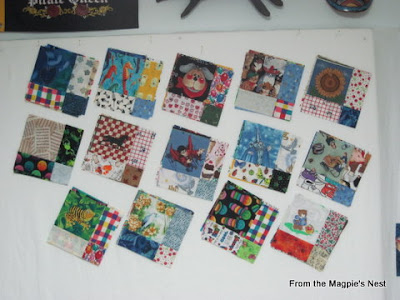 When it came time to arrange the quarter-blocks into a quilt top I realized how busy this quilt was going to be. I also realized that I would not be able to keep all the prints going right side up!
This arrangement sat on the wall overnight. 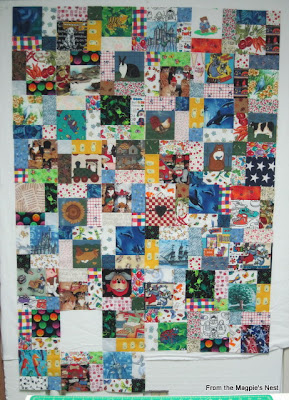 What I didn't realize was that I had made an error in the layout.

The next day I took all the blocks off the wall and had a second go. 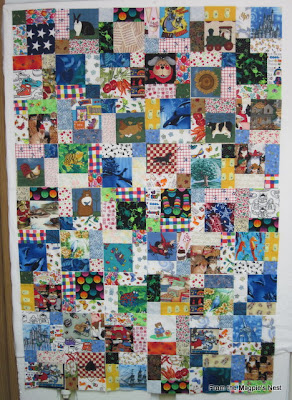 I was determined not to make any additional 9 Patch blocks for this quilt; I had to use what I'd already made. With the blocks now in a consistent arrangement it wasn't until the very last row that I had to begin turning some upside down. If you look closely (double click on the pictures and it should be easier) you will see that I had to turn two hearts and a chicken on their heads. There are a couple of blocks in the collection that are not directional but they look best where they are, not in the bottom row. Believe me, I tried!
I started sewing these blocks together yesterday. If I'd been feeling better I could have had the whole thing done in a day. There's no real rush though, so I'll be happy to get it sewn together today or tomorrow. And then I think there's going to be a Halloween version of this pattern going up on the wall. ;- )
Posted by Magpie Sue at 9:03 AM