One Down, Three to Go!

After that little bit of playtime to make the house block (see previous post) I buckled down to quilt "Cookies & Lemonade." It had been pin-basted before I signed up for the New Year's Eve Challenge but I wasn't really sure how I was going to to quilt it at the time. No brilliant answers came to me in the interim so I figured I'd just start in the middle and see how it developed. I eyeballed a diagonal line through the crumb blocks in the central panel of the quilt, stitching from corner to corner of each block. It wasn't always easy to find the corners, let me tell you! 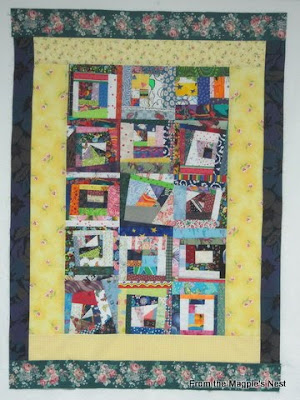 Then I stitched a giant zigzag pattern in each successive ring of strips. All I used for marking were the corners of blocks or a ruler and straight pins. 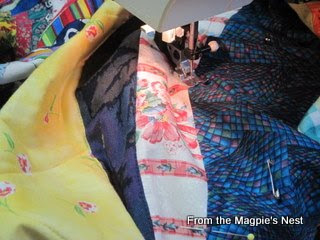 I had a bit of a problem when I finished with the last ring because there were still the strips at the top and bottom that give the quilt its' length that needed to be quilted. Eventually I decided to just keep going with the zigzag pattern and was able to figure out spacing without too much trouble. In this case I chose to ignore the seam line between the two prints altogether to take my quilting closer to the perimeter of the quilt. 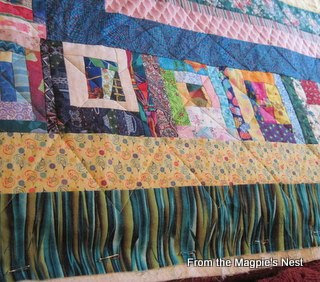 The next day I trimmed the quilt and made binding for it. I would have sworn that I'd measured and reckoned correctly but I came up short of binding as I was headed toward the home stretch. And of course I'd used up all of the print I'd chosen for the binding; there was no more to be had. It took some doing but I finally found something else altogether that at least blends in to cover that last 12" or so. I'd be interested to find out just how long it takes the quilt's new owner to discover the change in print. ;- ) 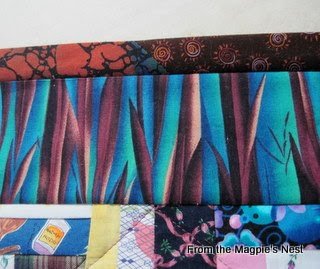 So this quilt is officially done and can be checked off my New Year's Eve Challenge list. Woohoo! 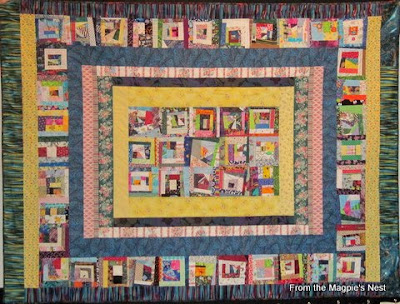 This is not a wonderful picture of the finished quilt because it was taken in the living room under very poor light. We may have to try again before the quilt leaves for its' new home. It looks like we're having a bit of sunshine at the moment... but of course there aren't enough hands available and no place dry enough to take a picture outside. LOL - my inventive son just suggested we put the quilt on the roof of the house and then get a satellite image of it. I would love to see how well that would work!
Posted by Magpie Sue at 10:46 AM