Woohoo! I have finally brought my collection of black and white and pink friendship blocks from 2002 to the first stage of quilt completion. {big sigh} What a relief!

When you last saw this work in progress the blocks had just been set together. That was quite an ordeal in itself. Fun, but time consuming and just a tiny bit tedious at times. 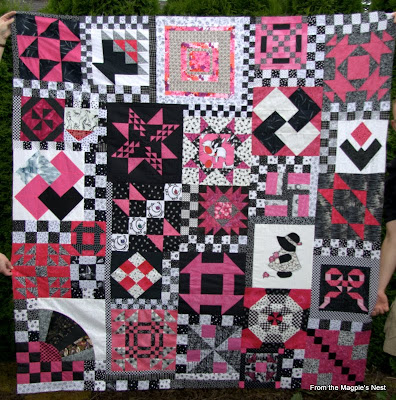 At that point I honestly thought this would be another double bed quilt. It was nearly wide enough. But I was tired of working on it and slightly tired out by it. So I put it away and worked on other things. It hung around in the back of my mind though. A couple of weeks ago I decided to make finishing this top one of my goals for Finn's New Year's Eve UFO challenge. Another goal is to make a back for it, but that will be another project altogether.

When I got the top out again I was happy to discover that I could look at it with fresh eyes. After some journaling about it I managed to get past the idea of a bed quilt. The top is nearly square in the picture above; I decided to let that be the shape it would keep. In order to make it more squre I needed to add a narrow border to the two sides. The right side is shown below in the process of auditioning possibilities.

The left side is in the picture below, pinned together.

I had to pleat the flimsy on my design wall in order to see both sides at the same time and try to achieve some sort of overall balance. 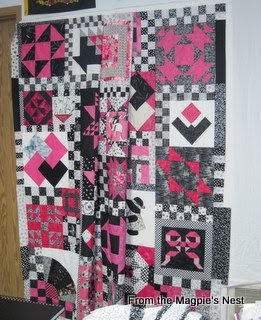 It hung there for a few days while I did some beading to get my Bead Journal Project caught up for this year. Once I had those skinny borders on, however, I realized that I no longer wanted a frame of pink like I had originally planned. Further auditioning of various black and white prints for a final whole-cloth border revealed that a predominantly black border was not going to work either. But a white with black print seemed to magically do the trick. Here's the right half of the quilt top on my kitchen floor: 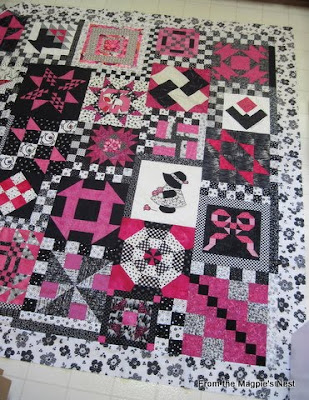 And the left half: 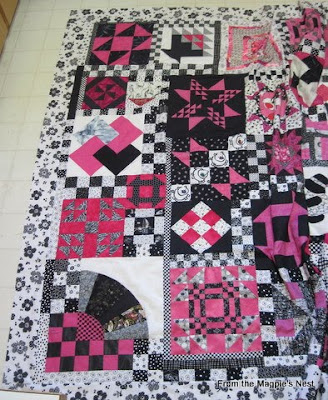 I think now that I will use a pink for the binding. Long-time readers may remember a pink stripe I bought; it should effectively bring all the different pinks together.

I had to do a bit of piecing to get the final border on this top. Out of the one yard cut I started with this is all I have left: 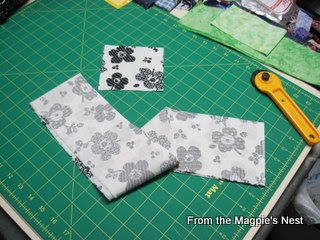 And to cap off my accomplishment I have come up with an actual name/title for this quilt: "Play Group." No doubt that's due in part to all the nice compliments I received on my 'play' block that ended up in the cover quilt of Tonya's new book!